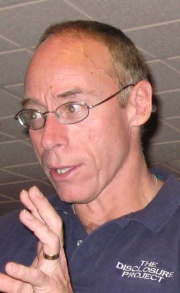 Steven M. Greer (June 28, 1955) is an American physician, ufologist, author, lecturer and founder of the Orion Project and The Disclosure Project.[1]

According to Greer, he enrolled in Appalachian State University in Boone, North Carolina, but in 1974 he "left traditional college at Boone to enter teacher training at Maharishi International University".[2] As of 2007, Greer was licensed to practice medicine in Virginia and has also been licensed in North Carolina.[3]

Greer is former chairman of the Department of Emergency Medicine at Caldwell Memorial Hospital in Lenoir, North Carolina, and a lifetime member of the Alpha Omega Alpha Honor Medical Society.[4]

In 1990 Greer founded the Center for the Study of Extraterrestrial Intelligence (CSETI) (not to be confused with SETI), and offers how-to training on initiating contact with extraterrestrial intelligence.[5] Greer also teaches the use of meditation techniques that he claims allow attendees to "remote view" locations and times (past and present), and develop "cosmic consciousness" and supernatural abilities such as precognition.

In 1993, Greer founded the Disclosure Project, claiming evidence of extraterrestrial visits to Earth, and a wide-ranging conspiracy by governments in the United States and other nations to cover up evidence of these visits. Template:Citation neededGreer also claims that these groups suppress unspecified extraterrestrial technologies from the people of the world, including free energy (see free energy suppression).[6].One of the Disclosure Project's most famous presentations was at the National Press Club in 2001, where Greer and a number of individuals came forward with alleged evidence.[6]

Greer is also the founder of the Advanced Energy Research Organization (AERO) and The Orion Project.[7] Both seek funding for research into perpetual motion and other free energy devices.[8]

According to Greer he is a contactee who has coined the term "close encounter of the fifth kind" (a.k.a. CE5) to describe alleged human initiated contact with extraterrestrials.[9] CE5 encounters are "characterized by mutual, bilateral communication rather than unilateral contact."[10]

Greer and his wife Emily have four daughters and reside in the Charlottesville, Virginia area.[4]