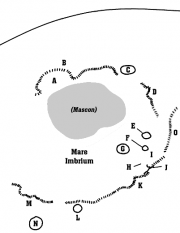 Detail map of Mare Imbrium's features. Hadley Rille is the feature marked "I".

Mons Hadley is a massif in the northern portion of the Montes Apenninus, a range in the northern hemisphere of the Moon. The selenographic coordinates of this peak are 26.5° N, 4.7° E. It has a height of 4.6 km and a maximum diameter of 25 km at the base.

To the southwest of this mountain is a valley that served as the landing site for the Apollo 15 expedition. To the southwest of this same valley is the slightly smaller Mons Hadley Delta (δ) peak with a height of about 3.5 km. The coordinates of this peak are 25.8° N, 3.8° E. To the west of these peaks is the sinuous Rima Hadley rille where the Fallen Astronaut memorial has been placed in memory of those astronauts who died in the advancement of space exploration.

These features were named after John Hadley.

This sinuous lunar rille follows a course generally to the northeast, toward the Mons Hadley peak, for which it is named. This feature is centered at selenographic coordinates 25.0° N, 3.0° E, and lies within a diameter of 80 km. It begins at the crater Béla, an elongated formation with the long axis oriented to the northwest.

Four small craters near this rille have been assigned names by the IAU. These are listed in the table below.

By convention these features are identified on lunar maps by placing the letter on the side of the crater mid-point that is closest to Mons Hadley.