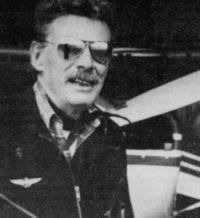 For many years, Bennewitz had been interested in UFOs, and had conducted his own investigations into the subject. He became convinced that the so-called Cattle mutilations were due to aliens after he met Myrna Hansen, who was hypnotized by University of Wyoming psychologist R. Leo Sprinkle. Under hypnosis, Hansen offered a detailed account of being kidnapped by aliens and taken to an underground base in what she thought was New Mexico;.There, Hansen says, she saw many liquid-filled vats containing portions of cattle and human remains. (Bennewitz would later accuse Sprinkle of being a CIA agent, and have nothing more to do with him).

Based on this and other evidence, Bennewitz claimed to have uncovered the fact that aliens were controlling humans through electromagnetic devices, and furthermore claimed that UFOs were regularly flying near Kirtland and the nearby Manzano Nuclear Weapons Storage Facility and Coyote Canyon Test Area. He provided photos of an alleged UFO flying near Coyote Canyon at Kirtland Air Force Base.

After concluding that aliens were in fact active on earth, Bennewitz detailed his assertions to the Aerial Phenomena Research Organization, who regarded him as a deluded paranoid. He then wrote to Air Force Sergeant Richard C. Doty in October 1980 and reported his various claims. Realising that Bennewitz had, as James Mosely writes, "grossly misinterpreted" the information from some "supposedly secure communications systems," Kirtland AFB authorities sent Doty to investigate. [1]

A few days after receiving his letter, Doty and Air Force scientist Jerry Miller interviewed Bennewitz at his home. He showed them his elaborate equipment setup designed to photograph, film and otherwise monitor the supposed UFOs.

One of the curiosities of the case is that Bennewitz seems to have photographed some genuinely unexplained aerial phenomena: Clark cites an Air Force memorandum released via the Freedom of Information Act, which reports, "after analyzing the data collected by Dr. BENNEWITZ, Mr. MILLER related the evidence clearly shows some type of unidentified aerial objects were caught on film; however, no conclusion could be made whether these objects pose a threat to the Manzano/Coyote Canyon areas." (Clark 1998, 146)

Bennewitz was invited to Kirtland AFB on November 10, 1980, to present his findings to a small conference of Air Force officers and scientists. One week later, writes Clark, Air Force officials told Bennewitz they would not be investigating his evidence any further.

For most of the 1980s, Doty and/or ufologist William Moore would relate mostly spurious information to Bennewitz as part of a disinformation campaign designed to distract him from secret military projects at Kirtland. The result was that, over the years, Bennewitz grew ever more paranoid, and his health deteriorated so badly that he had a nervous breakdown.

Bennewitz's stories were later absorbed into the conspiracy investigated by Danny Casolaro; the alleged Dulce Base would later find a life of its own in conspiracy lore. Bennewitz provided aerial photographs of what he claimed was an alien aircraft that crashed near the alleged Dulce Base which fueled the lore. An alien craft was never found at the suspected crash site. Investigators did find evidence that something did crash in the area but they were never able to confirm the story by Bennewitz claiming that it was an alien craft. These photos are visible at [www.dulcephenomena.com]. The photos taken by Bennewitz have notes attached to them written by Bennewitz claiming that certain objects and alien beings are in the photos. These photos are difficult to view and they do not provide enough detail to verify or deny the story. This has fueled the lore of the alleged Dulce Base.

Ufologist William Moore was scheduled as the main speaker, and he generated controversy even before his appearance: He refused to submit his paper for review prior to the convention, and also announced that he would not answer any follow-up questions as was common practice. Unlike most of the convention's attendees, Moore did not stay at the same hotel that was hosting the convention.

When he spoke, Moore said that he and others had been part of an elaborate, long-term disinformation campaign begun primarily to discredit Paul Bennewitz: "My role in the affair ... was primarily that of a freelancer providing information on Paul's (Bennewitz) current thinking and activities." (Clark, 1998, 163) Air Force Sergeant Richard C. Doty was also involved, said Moore, though Moore thought Doty was "simply a pawn in a much larger game, as was I." (Clark, 1998, 163) One of their goals, Moore said, was to disseminate information and watch as it was passed from person to person in order to study how information was circulated in UFO enthusiast subcultures. Moore further reported that "he played a part in having Bennewitz involuntarily committed to the New Mexico State Mental Hospital on three separate occasions."[2]

Moore said that he "was in a rather unique position" in the disinformation campaign: "judging by the positions of the people I knew to be directly involved in it, [the disinformation] definitely had something to do with national security. There was no way I was going to allow the opportunity to pass me by ... I would play the disinformation game, get my hands dirty just often enough to lead those directing the process into believing I was doing what they wanted me to do, and all the while continuing to burrow my way into the matrix so as to learn as much as possible about who was directing it and why."(Clark, 1998, 164)

Once he finished the speech, Moore immediately left the hotel. He left Las Vegas that same night.

Moore's claims sent shock waves through the small, tight-knit UFO community, which remains divided as to the reliability of his assertions.