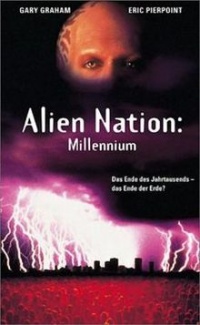 Alien Nation is a television show from the Fox Network which lasted a single season. Alien Nation: Millennium (original airdate: January 2, 1996) was the third television movie produced to continue the story after the premature cancellation of the popular series.

Millennium was written and directed by Kenneth Johnson.

The plot follows human detective Matthew Sikes and his Tenctonese partner George Francisco as they investigate a mind-altering Tenctonese artifact being used to lure followers into a deadly cult. The artifact used in this movie was the same one from Alien Nation episode Generation to Generation.