Alien Nation - The Enemy Within 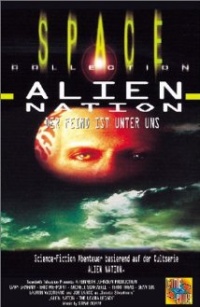 Alien Nation is a television show from the Fox Network which lasted a single season. Alien Nation: The Enemy Within (original airdate: November 12, 1996) was the fourth television movie produced to continue the story after the premature cancellation of the series.

Alien Nation: The Enemy Within was written by Dianne Frolov & Andrew Schneider, and directed by Kenneth Johnson.

In this movie, detective Matthew Sikes and his Tenctonese partner George Francisco investigate a group of Tenctonese called the Eenos. The sub-plot involves Tenctonese binnaum Albert Einstein and his new bride May attempting to have a child (with George's help) -- a reversal of the Alien Nation episode Three to Tango.