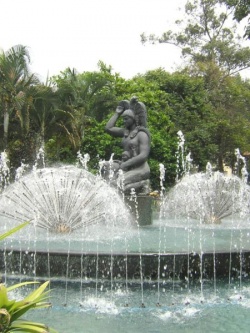 The goddess Bachué (from the Chibcha language "the one with the naked breast"), is a mother goddess that according with the muisca colombian mythology is the mother of mankind. She emerged of the waters in the Lake Iguaque with a baby in her arms, who grew to become her husband and populate the earth. She received worshipping in a temple, in the area now occupied by the town of San Pedro de Iguaque.

The legend tells that after she accomplished the goal of giving birth to mankind, Bachue and the parrot god, her husband, became snakes and returned to the sacred lagoon. The history of Bachue was mentioned by the Spanish Empire cronist, Fray Pedro Simón in his book "NOTICIAS HISTORIALES" when he writes that the indigenous people also called her "Furachogua" (meaning the good woman), and worshipped her as one of their main deities. Simon also mentions that the muiscas believed that Bachue sometimes comes back from the underworld to guide her people.