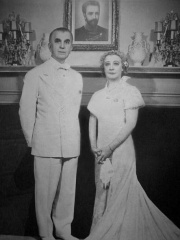 Ballard was born in Newton, Kansas and married his wife in Chicago in 1916. Ballard served in the U.S. Army in World War I, and then became a mining engineer. Both Edna and Guy studied Theosophy and the occult extensively.

Ballard visited Mount Shasta, California in 1930, where he met another hiker who identified himself as Saint Germain.[1] Mr. Ballard's experiences take place within the larger North American mountain ranges. Ballard provided details of his encounters in a series of books Unveiled Mysteries and The Magic Presence, using the pen name "Godfré Ray King."

Guy Ballard, his wife Edna, and later his son Donald, it is believed, became the "sole Accredited Messengers" of Saint Germain. Their teachings form the original nucleus for what are today called the Ascended Master Teachings.

The "I AM" Activity started from public lectures about these encounters and grew rapidly in the 1930s. Ballard lectured frequently in Chicago about Saint Germain's mystical teachings, in which America was destined to play a key role. By 1938, there were claimed to be about a million followers in the United States.

The "I AM" Activity describes itself as an apolitical, spiritual and educational organization financed by contributions from its members. Its parent organization is Saint Germain Foundation, with headquarters in Schaumburg, Illinois, a suburb of Chicago.[2]

Guy Ballard died on 29 December 1939 and Edna Ballard died on 12 February 1971. Guy Ballard originally claimed that Ascension meant the ability to enter heaven alive, but after Guy Ballard died a normal death of natural causes, the word "Ascension" was redefined by the I AM movement as (resulting from one's services during one's lifetime for the Ascended masters) being able to rise to a higher level of heaven after one's death than the average person, and thus attaining the status of an Ascended Master. Specifically, this means in the original teachings of Theosophy that, to become a Master, he would have had to ascend upon his death to the fifth level of Initiation.

It is asserted by these religions that the Master Godfre's previous incarnations were:[3]

It is believed by those who adhere to the Ascended Master Teachings that Edna Ballard, after her death, became the Ascended Lady Master Lotus. (She used the pen name Lotus Ray King.)

It is asserted by these religions that the Lady Master Lotus's previous incarnations were:[4]