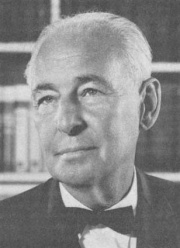 Lloyd Viel Berkner (February 1, 1905, in Milwaukee – June 4, 1967, in Washington, D.C.) was an American physicist and engineer. He is notable as the first person to measure the height and density of the ionosphere. This permitted the first complete theory of short wave radio propagation.

Later he investigated the development of the Earth's atmosphere. Since he needed data from the whole world, he proposed the International Geophysical Year in 1950. At that time, the IGY was the largest cooperative study of the Earth ever undertaken.

In 1963, Berkner, with L.C. Marshall, advanced a theory to describe the way in which the atmospheres of the solar system's inner planets had evolved.

Beginning in 1926, as a naval officer, Berkner assisted in the development of radar and navigation systems, naval aircraft electronics engineering, and studies that led to the construction of the Distant Early Warning system, a chain of radar stations designed to give the United States advance warning in the event of a missile attack across the North Pole.

Personal Information: Lloyd V. Berkner High School in Richardson, Texas was named for him in 1969. The lunar crater Berkner is named after him. An island in Antarctica was also named for Dr. Berkner (Berkner Island) for his work as a radio operator on the first Byrd expedition to Antarctica in 1927. He was reported to be a member of the "Majestic 12", twelve scientists exploring the Roswell UFO Incident, and a member of the President's advisory committee. He was married to Lillian Fulks Berkner and had two children (Patricia Berkner Booth and Phyllis Berkner Wiederaenders) and 5 grandchildren (Charles A. Booth, Theodore Booth, Susan Booth, Mary Ashley Teague, and Karen Ashley Traxler)