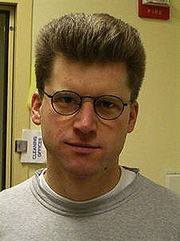 Martin Bojowald (born February 18, 1973) is a German physicist who now works at the Institute for Gravitation and the Cosmos of the Pennsylvania State University, USA. In 2005 he joined the permanent staff of the IGC, after spending several years at the Max-Planck Institute for Gravitational Physics in Potsdam, Germany. He works on loop quantum gravity and physical cosmology and is credited with establishing the sub-field of loop quantum cosmology.