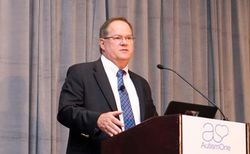 James Jeffrey "Jeff" Bradstreet (July 6, 1954 – June 19, 2015), was a controversial American doctor, alternative medicine practitioner, and a former Christian preacher[1] who ran the International Child Development Resource Center in Melbourne, Florida,[2] a medical practice in Buford, Georgia[3] and in Arizona, where he practiced homeopathy.[4][5]

Bradstreet has held a Florida medical license since 1984. He obtained his Bachelor of Science degree from the University of South Florida in 1976 in Natural Sciences, where he also went to medical school beginning three years later. His postgraduate research focused on aerospace medicine, and he received his training in this field from Wilford Hall Medical Center. He was an adjunct professor of child development and neuroscience at the Southwest College of Naturopathic Medicine in Tempe, Arizona.[6]

Bradstreet has published some controversial autism research, which implicates vaccines in the causation thereof, in the Journal of American Physicians and Surgeons, which is not indexed by PubMed. This research has concluded that autistic children have a higher body burden of mercury,[7] and that three autistic children have measles virus RNA in their cerebrospinal fluid.[8] This research was originally presented to the Institute of Medicine before they published their report concluding that the evidence favors rejection of a relationship between vaccines and autism.[9]

Bradstreet treated an autistic child named Colten Snyder (who was one of the test cases in the autism omnibus trial) with chelation therapy. This he did in spite of the fact that, according to Denise Vowell, "The April 29, 2000 hair test for mercury demonstrated a low level of mercury in Colten’s hair, but one within the reference range of normal for the laboratory, and one well below the 90th percentile for U.S. children ages six to eight." In addition, Vowell stated, "The more disturbing question is why chelation was performed at all, in view of the normal levels of mercury found in the hair, blood and urine, its apparent lack of efficacy in treating Colten's symptoms, and the adverse side effects it apparently caused."[10] Over an eight-year period, Colten visited Bradstreet's office 160 times.[11] Stephen Barrett has stated, "It appears to me that Bradstreet decides which of his nonstandard theories to apply and records diagnoses that embody them," and describes Bradstreet's mercury provoked tests as "phony".[10] Peter Hotez has characterized Bradstreet's proposal to treat autism with chelation therapy in order to remove metals like mercury as "dangerous."[5]

In an interview with the Chicago Tribune, Bradstreet defended the use of intravenous immunoglobulin (IVIG) as an autism treatment, saying, "Every kid with autism should have a trial of IVIG if money was not an option and IVIG was abundant."[12] Bradstreet also published some research regarding the use of hyperbaric oxygen therapy for autism,[13] some of which has concluded that it is ineffective,[14] as well as a paper arguing that autistic children have an increased vulnerability to oxidative stress.[15] Further treatments Bradstreet frequently used on autistic children included Gc-MAF, which he claimed to have treated 600 children with;[16] this was partially supported by parents reporting their gratitude for his treatment of their children.[17] In an article in Autism Science Digest, Bradstreet endorsed stem cell therapy as an autism treatment, writing, "By natural design, the purpose of stem cells in the brain is regulation, healing, and repair. Biologically, therefore, stem cells appear to be better suited to heal the brain than any other current therapy. No matter how challenging the task of repairing the brain may appear to be, case reports have built an argument for supporting the reversibility of autism using immunological interventions."[18]

Bradstreet's body was found dead from an apparently self-inflicted gunshot wound in the Broad River in Rutherford County, North Carolina, in June 2015, after his Buford, Georgia, medical office was raided by the Food and Drug Administration (FDA).[3][19][20] At the time of his death, he lived in Braselton, Georgia and ran his medical practice in Buford.[3]

Bradstreet's son is autistic, which Bradstreet attributed to a vaccination his son received at age 15 months.[21]