Captain Harlock and the Queen of a Thousand Years 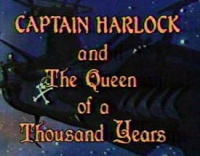 Cover di Capitan Harlock and the Queen of a Thousand Years

Captain Harlock and the Queen of a Thousand Years is an animated science fiction television series produced by Harmony Gold USA. The series was created by Carl Macek by combining footage from Leiji Matsumoto’s Captain Harlock and Queen Millennia anime series.[1]

This is the second time the 1978 Captain Harlock series was treated for English language distribution. The first attempt was in 1981 with the lesser known Ziv International, who only released two volumes of two episodes each, the first (episodes 1 and 9) a relatively faithful adaptation, the second (episodes 2 and 3) retooling the approach to a more farcical one. This attempt is often confused with the Harmony Gold production, but the two productions are not related.

The plot of Macek’s creation has no relation to Matsumoto’s works.

Captain Harlock and the Queen of a Thousand Years takes place in an undisclosed point in the future (the only reference to its date being a single reference to “the eruption of Krakatoa 700 years ago,” placing its approximate date at 2583), after humankind has colonized the distant stars. But prosperity has corrupted the people of Earth, who have become corrupt and decadent.

The Mazone, a race of sentient plants, hatch a plot to seize Earth after their own planet is destroyed. A lone scientist attempts to warn the people of Earth, but at the cost of his reputation and life. The titular Harlock is blamed for the various instances of the Mazones’ attacks upon the Earth, and, despite being an outcast amongst his own people, plans to stop the Mazone and save humanity from the alien threat with aid from Princess Olivia, next in line to throne of Millennia, the Mazones’ supposed allies in the invasion.

After the success of Robotech, Harmony Gold sought to expand their syndicated television production in other animation series originating in Japan. The account according to Carl Macek, producer of Robotech, was that he was subsequently asked what other Japanese animated series he was interested in dubbing, and he expressed an interest in Leiji Matsumoto’s Captain Harlock.

After the rights were obtained, Macek was informed that Harmony Gold had allocated airtime for 65 episodes. Captain Harlock, however, was only 42 episodes long, prompting Harmony Gold to buy another Matsumoto series, Queen Millennia. It then fell to Macek and his team to combine the two shows into one series.[2]

Unlike Robotech, it was decided to combine the two series simultaneously instead of simply running them one after the other with some “connecting” episodes. At the same time, it was also decided to change the timing of episodes, thus creating a situation where clips from episodes at various points in the original series would appear in a single episode in the American series. This resulted in a wildly different plot from both of the original sources. The Queen Millennia television series also ran 42 episodes, with the result that many episodes were dropped from both series (including the final episodes of the Millennia series, which therefore ended in a cliffhanger) in order to create the 65 American episodes. Additionally, despite the title of the series, the two titular characters never appeared together on-screen as the original shows took place in different continuities.