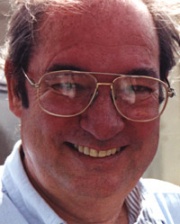 Milton William "Bill" Cooper (May 6, 1943 - November 5, 2001) was an American writer, shortwave broadcaster and conspiracy theorist. Cooper came to public awareness in the late 1980s when he promulgated a number of theories dealing with the assassination of President Kennedy and alleged links between the United States government and various extra-terrestrial races.

The son of a U.S. Air Force officer, Bill graduated in 1961 from Yamato High School in Japan, [1] and enlisted in the U.S. Air force. He was honorably discharged in 1965, and enlisted in the U.S. Navy in December of that year. He served in Vietnam, rising to the rank of petty officer. Cooper was awarded the Navy Commendation Medal with combat V and the Navy Achievement Medal with combat V. He was honorably discharged in 1975.[2]

Cooper became a popular speaker on the UFO lecture circuit, and expanded his account into the book Behold a Pale Horse.

Cooper is perhaps best known for this 1991 book which details many of his claims about various conspiracy theories. The title is from the Bible, Template:Bibleverse: "And I looked, and behold a pale horse: and his name that sat on him was Death, and Hell followed with him." This includes the text of The Protocols of the Learned Elders of Zion. Cooper placed a notice at the beginning of the chapter claiming that the Protocols were not about Jews but merely disguised as such, in truth detailing the New World Order conspiracy.

Behold a Pale Horse details Cooper's claims about the influence of UFOs on the US government, the New World Order, the assassination of President Kennedy, and the Apollo Moon landing.

Cooper's research later led him to the conclusion that he (and several others) had been deceived by superiors into believing the UFO conspiracy with bogus documents. In a paper available at his website (hourofthetime.com) called MAJESTYTWELVE he stated:

When I saw Operation Majority while serving in the Navy I believed the alien threat was real just like everyone else. It was not until I had performed many years of research that I was able to fully understand exactly what it was that I had seen. It was extremely difficult for me to believe that my government and the United States Navy had used me, especially since I had dedicated my life to government and military service. Most government and military personnel cannot and will not believe such and [sic] idea.[3]

In addition to his literary pursuits, Cooper was also the host of his own worldwide shortwave radio show, Hour of the Time, as well as a political activist known for his court battles with the Internal Revenue Service (IRS) despite strong efforts to dissuade him from pursuing his case.Template:Citation needed

He and Wayne Bentson co-researched the related CAJI News Service brief titled BATF/IRS—Criminal Fraud,[4] a history of alleged crimes committed by the Internal Revenue Service, Bureau of Alcohol, Tobacco and Firearms and the Department of the Treasury. In this article, published in Veritas magazine, issue #6, in September 1995, Cooper asserted that the IRS is actually the same organization as the Bureau of Alcohol, Tobacco and Firearms. [4]

He had also produced several documentaries covering subjects such as the John F. Kennedy assassination and government 'black projects'. Cooper insisted that Kennedy was shot with a .45 calibre pistol by his driver; a theory which many feel conflicts with available physical evidence and eyewitness statements.

Cooper's detractors labeled him a conspiracy theorist because of his publications, a charge Cooper did not deny, arguing this:

Investigation of the alleged Internal Revenue Service and the Bureau of Alcohol, Tobacco and Firearms has disclosed a broad, premeditated conspiracy to defraud the Citizens of the United States of America. Examination of the United States Code, the Code of Federal Regulations, the Statutes at Large, Congressional Record, the Federal Register, and Internal Revenue manuals too numerous to list, reveals a crime of such magnitude that words cannot adequately describe the betrayal of the American people. What we uncovered has clearly been designed to circumvent the limitations of the Constitution for the United States of America and to implement the Communist Manifesto within the 50 States. Marx and Engels claimed that, in the effort to create a classless society, a "graduated income tax" could be used as a weapon to destroy the middle class. [ . . . ] Through the clever use of language, the government promotes the fraud.[5]

Throughout the late 1980s, Cooper was a controversial figure in the UFO research community. For the most part, he followed many of the claims of John Lear, specifically, that the government of the United States has had contact and has entered into a bargain with an extraterrestrial society and that those ETs were responsible for abductions. He circulated materials on Usenet as well as the old Paranet BBS. Notable among them was a Petition to Indict those involved with the UFO cover-up. His UFO beliefs of the time are well described in Behold a Pale Horse.

In later years, Cooper recanted his UFO-oriented beliefs, asserting that they were in fact part of the Illuminati plot to subjugate the United States.Template:Citation needed

William Cooper founded Harvest Trust, the CAJI News Service, Veritas newspaper, The Intelligence Service, and Harvest Publications. Under his leadership Harvest Trust ventured into publishing. The first book under the Harvest Trust imprint was Oklahoma City: Day One (ISBN 0-9653307-1-0), by Michele Marie Moore about the Oklahoma City bombing. In 1998 Veritas and Harvest Publications was sold to Hallmark Creative Corporation along with the copyright and all rights to all written material produced or ever to be produced by William Cooper including Behold A Pale Horse and Oklahoma City: Day One. Hallmark Creative Corporation has contracted to ensure this material is always available to the public.[6]

An advocate of free radio, Cooper operated the unlicensed Independence Foundation Trust at 101.1 FM in Eagar, Arizona. He boasted of having helped more than 700 low-power FM affiliate stations get equipped and on the air, although this figure has apparently never been validated.Template:Citation needed

Shortly after the bombing of the Alfred P. Murrah Federal Building, Rush Limbaugh read a White House memo on the air during his broadcast which named William Cooper, ". . . the most dangerous radio host in America."Template:Citation needed Mr. Cooper considered President Bill Clinton's pronouncement the greatest compliment that he had ever received.[6]

Cooper was charged with various crimes, including tax evasion from 1992 to 1994, and bank fraud for giving false information on a loan application. A warrant was issued for his arrest on July 1, 1998 after he failed to appear in federal court. Claiming to belong to the "Second Continental Army of the Republic," he posted a message in big red letters on his Internet site:

"WARNING!! Any attempt by the federal government or anyone else to execute the unconstitutional and unlawful arrest warrants... will be met with armed resistance."[7]

The U.S. attorney for Arizona, Jose de Jesus Rivera, said federal agents would move carefully to arrest Cooper, who faced a four-count indictment on charges that he failed to pay taxes from 1992 to 1994[8]

In Phoenix, Thomas Nixon of the U.S. Marshal's Office said authorities intended to act cautiously as they enforced the arrest warrant "because no federal agency wants any copies of Ruby Ridge or Waco."[9]

But Nixon added, "Obviously, at some point, we'll effect the arrest."[10]

On his Web site, however, he called summonses "unconstitutional" and "unlawful" because the federal government has no jurisdiction in Arizona "except over land that was ceded to the United States by the State Legislature."[11]

In the 1990s Cooper's interest moved from UFOs, to covert government programs and the militia movement. In June 2001 he warned publicly about an important terrorist attack on United States of America that would be blamed on Osma Bin Laden.[12]

By 1998 Cooper was living in Arizona. He was wanted for tax evasion.[13][14] Another warrant was issued for "aggravated assault with a deadly weapon" against a local doctor shortly before his death.[13] On his website, Cooper wrote that any attempt to execute "unlawful" arrest warrants "will be met with armed resistance."[13]

In July and September 2001, Cooper was accused of brandishing a handgun to threaten passers-by near his home in Eagar, Arizona.[14] Just before midnight on November 5, 2001, officers of the Apache County Sheriff's office converged on Cooper's homestead to arrest him on a warrant arising from the threat complaint.

Trying to avoid a violent confrontation and potential siege with a man rumored to be unstable and armed, the team used subterfuge to lure Cooper out of his home in the middle of the night. Officers pretended to be rowdy trespassers on the edge of Cooper's rural property, blaring rock music and making other festive sounds until Cooper came out to investigate.Template:Citation needed

According to police accounts, when the deputies identified themselves, Cooper fled back toward his house, drew a handgun, and began shooting. One deputy was shot in the head and was hospitalized in critical condition.[14] Another deputy returned fire, killing Cooper.

His life and theories are the subject of the 2005 documentary film, The Hour of Our Time, The Legacy of William Cooper.

* The individual being interviewed is using the name William Morgan as a pseudonym.
** This episode is a video rather than a radio broadcast.
*** At the beginning of this show, Cooper states the title and refers to the episode as one in the Mystery Babylon series.