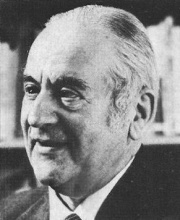 Samuel Abraham Goudsmit (The Hague, July 11, 1902 — Reno, December 4, 1978) was a Dutch-American physicist famous for jointly proposing the concept of electron spin with George Eugene Uhlenbeck in 1925.[1]

Goudsmit studied physics at the University of Leiden under Paul Ehrenfest, where he obtained his PhD in 1927. After receiving his PhD, Goudsmit served as a Professor at the University of Michigan between 1927 and 1946. In 1930 he co-authored a text with Linus Pauling titled The Structure of Line Spectra. During World War II he worked at the Massachusetts Institute of Technology[2].

He was also the scientific head of the Alsos mission and successfully reached the German group of nuclear physicists around Werner Heisenberg and Otto Hahn at Hechingen (then French zone) in advance of the French physicist Yves Rocard. Alsos was part of the Manhattan Project, which was designed to assess the progress of the Nazi atomic bomb project. In the book Alsos published in 1947, Goudsmit concludes that the Germans did not get close to creating a weapon, which he attributed to the inability of science to function under a totalitarian state (the development of atomic weapons by at least two other totalitarian states has been seen to go against this conclusion, although it needs to be said that later atomic weapons were developed with the knowledge of their possibility, and also sometimes with stolen technology). His other conclusion, that the German scientists simply did not understand how to make an atomic bomb, has been disputed by later historians (see Heisenberg), but his assessment of the lack of progress in the German program — if not his conclusions as to why it was that way — has generally held up over time. After the war he was briefly a professor at Northwestern University and from 1948-1970 was a senior scientist at the Brookhaven National Laboratory, chairing the Physics Department 1952-1960. He meanwhile became well known as the Editor-in-chief of the leading physics journal Physical Review, published by the American Physical Society. On his retirement as editor in 1974, Goudsmit moved to the faculty of the University of Nevada in Reno.

He also made some scholarly contributions to Egyptology published in Expedition, Summer 1972, pp. 13–16 ; American Journal of Archaeology 78, 1974 p. 78; and Journal of Near Eastern Studies 40, 1981 pp. 43–46. The Samuel A. Goudsmit Collection of Egyptian Antiquities resides at the Kelsey Museum of Archaeology, The University of Michigan, Ann Arbor, MI.[3]