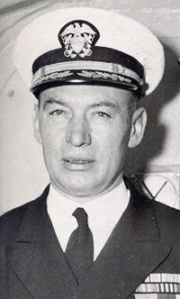 Roscoe Henry Hillenkoetter (May 8, 1897 – June 18, 1982), born in St. Louis, Missouri, was the third director of the post-WWII U.S. Central Intelligence Group (CIG) and the first director of the Central Intelligence Agency created by the National Security Act of 1947. He served as director of the CIG and the CIA from May 1, 1947 to October 7, 1950 and after his retirement from the United States Navy was a member of the board of governors of National Investigations Committee On Aerial Phenomena (also known as NICAP) from 1957 to 1962.

He graduated from the United States Naval Academy at Annapolis, Maryland in 1919.

He served tours in naval intelligence, several as assistant naval attache to France. He was wounded during the attack on Pearl Harbor, and afterwards was officer in charge of intelligence on Chester W. Nimitz's Pacific Fleet staff.

Then Captain Hillenkoetter commanded the USS Missouri (BB-63) in 1946.

First Director of the CIA

The U.S. government had no intelligence warning of North Korea's invasion (June 25, 1950) of South Korea. DCI Hillenkoetter convened an ad hoc group to prepare estimates of likely communist behavior on the Korean peninsula; its worked well enough that his successor institutionalized it. President Truman installed a new DCI in October.

Admiral Hillenkoetter returned to the fleet, commanding a cruiser division in the Korean War. He held two other commands before his retirement in 1957.

Board Member of NICAP

The National Investigations Committee On Aerial Phenomena was formed in 1956, with the organization's corporate charter being approved October 24. [2] Hillenkoetter was on NICAP's board of governors from about 1957 until 1962.[3] Donald E. Keyhoe, NICAP director and Hillenkoetter's USNA classmate, wrote that Hillenkoetter wanted public disclosure of UFO evidence.[4] Perhaps Hillenkoetter's best-known statement on the subject was in 1960 in a letter to Congress, as reported in the New York Times: "Behind the scenes, high-ranking Air Force officers are soberly concerned about UFOs. But through official secrecy and ridicule, many citizens are led to believe the unknown flying objects are nonsense."[5][6]

Actor Leon Russom played him in an episode of Dark Skies, a 1996 conspiracy theory television series.