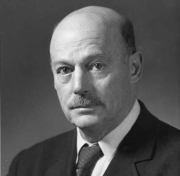 Jerome Clarke Hunsaker (August 26, 1886 – September 10, 1984) was an American airman born in Creston, Iowa, and educated at the Naval Academy and the Massachusetts Institute of Technology. He studied aerodynamics abroad and became an instructor at M.I.T. in 1914-16. He translated much of Eiffel's work including Resistance of the Air and constructed the first wind tunnel at M.I.T. Under him, graduate students were trained as aeronautical engineers. He designed the first modern airship built in the United States as well as the C and D class Navy airships, and with Westervelt and Richardson, also designed the NC flying boats. In 1917 he was a member of the joint Army and Navy Technical Board to create an aircraft program and in 1918 was attached to the Inter-Allied Naval Armistice Commission. Among his published works are: Stable Biplane Arrangements; Aërodynamic Properties of the Triplane; and Aëroplane Stability.