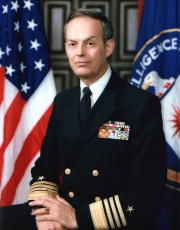 Since 2001, Inman has been the LBJ Centennial Chair in National Policy at The University of Texas at Austin Lyndon B. Johnson School of Public Affairs, and in 2005 was the school's interim dean [1]. Inman graduated from Texas with a bachelor's in history in 1950.

Inman has also served on the Board of Directors of the Council on Foreign Relations, Dell Computer, SBC Corporation (now AT&T) [2] and Massey Energy.

Inman was announced as President Bill Clinton's choice to succeed Les Aspin as Secretary of Defense on 1993 December 16, initially receiving broad bipartisan support. He accepted the post at first, but withdrew his nomination during an unusual press conference on 1994 January 18 that shocked members of both major political parties.

During the press conference, Inman made angry remarks about perceived mistreatment by New York Times columnist William Safire.[3] Safire wrote paragraphs on Inmans "anti-Israel bias shown", and ended in a four point list of other negative qualifications. Inman suggested that Safire had recruited Senator Bob Dole of Kansas to engage in a "vitriolic attack" on Inman, and also claimed that Dole and Senator Trent Lott were planning to "turn up the heat" on his nomination.

Dole's reaction was to state that "I have no idea what's gotten into Bobby Inman... Admiral Inman's letter doesn't make any sense to me." Lott appeared even more surprised, saying that "I am floored by [Inman's] bizarre press conference," while an unnamed White House aide added: "Most of us were glued to the tube, our mouths open in shock."[4]

In 2006, Inman criticized the Bush administration's use of warrantless domestic wiretaps, making him one of the highest-ranking former intelligence officials to criticize the program in public [5][6]