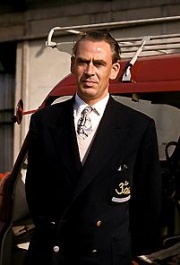 George King (January 23, 1919 - July 12, 1997) was Founder-President of The Aetherius Society, a UFO religion. He was also an inventor, author, lecturer and spiritual teacher.[1]

George King was born in Wellington, Shropshire to George and Mary King. Much of his childhood was spent in North Yorkshire. Both his mother and grandmother claimed to be psychics. His grandmother recognised what she believed were similar talents in her grandson and helped him to develop them. In his book about spiritual healing, You Too Can Heal,, King writes that at age eleven, when his mother was seriously ill and confined to her bed, he went alone into the woods and began to pray passionately for her recovery. According to King an "angelic being" appeared before him and instructed him to return home, as his mother had been healed. He arrived back to find his mother up and well.

When war broke out in 1939, King joined the National Fire Service as a part-time volunteer. King became section leader in an emergency task force. In 1940, he participated in the Dunkirk evacuation on the crew of a Thames fire float, and did rescue work following the London Blitz.

When hostilities ceased, King was 26, he turned to the study of yoga as well as various healing arts. In his book You Are Responsible!, King recounts that one Saturday morning in May 1954, while in his small flat in Maida Vale, London, he heard a loud, commanding voice instructing him to "Prepare yourself! You are to become the voice of interplanetary parliament." Shortly afterwards, he channelled his first message transmission purporting to come from an advanced spiritual being living on Venus and using the pseudonym Aetherius.

King quit his job as a taxi driver and established a new religious movement, the "Aetherius Society" to convey the messages of the extraterrestrials.[2] When King founded the Aetherius Society, he claimed that "space aliens held the key to the salvation both of the planet as a whole and of every individual on Earth."[3]

King adopted what he described as a "positive" form of trance in order to enter the state necessary to channel these messages. He contrasted this state with the "negative" form of trance adopted by many spiritualist mediums. The "positive" form of trance was, he said, the result of intense effort and concentration. He used techniques drawn from some of the advanced branches of yoga to concentrate upon one of the psychic centres or chakras connected to the spine and upon the telepathic impulses radiated by his communicators.

King gave away his possessions as he continued to receive transmissions which often were arranged in advance, and tape-recorded. Many were given in front of public audiences, such as at Caxton Hall in London which was regular venue for King. The recordings are in the possession of the The Aetherius Society. The trance condition that King adopted was, he said, extremely stressful. Moreover, it was potentially dangerous to enter it in public because of the risks of a loud noise or physical blow startling him out of it. By the time he stopped receiving transmissions in this way, in the late 1970s, he had experienced over 600 trances.

Some of the reported messages from these beings, whom he called the Cosmic Masters, dealt with the dangers of atomic experimentation, a new religious philosophy and the reality of life on other worlds. These were sent to the world’s media and governments.

On July 23, 1958, King claimed to have had physical contact with an extraterrestrial "Cosmic Master" who on had incarnated on Earth as Jesus but was now on the etheric plane of Venus. He claimed the contact occurred on top of Holdstone Downs, in North Devon, England; and he claimed great power had been sent out, specifically to prevent a war in Lebanon. In addition, he claimed the contact caused the hill itself to be charged with spiritual energy. Holdstone Down is now a regular place of pilgrimage for members of The Aetherius Society. Template:Citation needed

Within a few days, King channelled the first of a series of "message transmissions" from "Master Jesus" called "The Twelve Blessings". Delivered in the basement chapel of The Aetherius Society’s new premises on Fulham Road, London, the Blessings are now a central component in the spiritual teaching and practices of the society.Template:Citation needed

Holdstone Down proved to be the first of nineteen sacred mountains around the world charged in what became known as "Operation Starlight". Following the charging of the second mountain on Bodmin Moor in England, he said that he had heard a mighty voice deliver "the Lord’s Declaration", prophesying the coming to Earth of the "Next Master", an open landing of an extraterrestrial being. Seven more mountains were charged in the British Isles.Template:Citation needed

Four phases of the operation were conducted in America. Further phases in Australia and New Zealand followed. In New Zealand, on Mount Wakefield in the foothills of Mount Cook, he and his companion Keith Hope-Robertson lost their way and were forced to spend Christmas Eve 1960 overnight on the mountain. With two more phases in Europe, and a third one performed on Mount Kilimanjaro in Tanzania by a Master of "The Spiritual Hierarchy of Earth", Saint Goo-Ling, Operation Starlight ended on August 23, 1961. The Aetherius Society views the Charged Mountains as an endless source of spiritual power and the Twelve Blessings as a powerful way to tap it for one's own benefit and for that of humanity as a whole.Template:Citation needed

In 1959 King founded the "American Headquarters of The Aetherius Society" in Los Angeles (the temple of the Aetherius Society, the Sunday services at which the general public is welcome to attend, is located on Hollywood Boulevard), where he would live the remainder of his life, although he continued to visit London.[1]

In 1964, "Operation Bluewater" was born. For this King had to design a special apparatus capable of radiating a beam of "spiritual energy" through thousands of feet of seawater into one of Earth's "psychic centers". A boat was taken out on the Pacific over four phases, during which King said that he maintained telepathic contact with the "Cosmic Masters" while steering in complicated manoeuvres over the center. He claimed the result was that the San Andreas Fault was kept in balance and thousands of lives were saved.Template:Citation needed

On July 8, 1964, King claimed to receive a transmission describing how spacecraft from many worlds amassed in the skies of Earth to conduct her "Primary Initiation". King recorded this event and explained it in his book The Day The Gods Came, which was published shortly afterwards.Template:Citation needed

Realising mankind's abuse of the Earth and what he regarded as the inevitable karmic repercussions that were due as a result, King designed "Operation Sunbeam". It had a simple strategy: take spiritual energy given to man through Operation Starlight and send it to the Earth, thus balancing the karma of mankind. He designed a "Spiritual Energy Radiator" to radiate energy sent to it by an extraterrestrial spacecraft. He also devised a battery that he claimed could hold spiritual energy. Operation Sunbeam began on September 24, 1966 when two batteries were charged on Mount Baldy and discharged toward an offshore area of Santa Barbara considered a "Psychic Center of the Earth."[4]

From this technology came yet another operation. Begun on Holdstone Down on June 30, 1973, "Operation Prayer Power" was meant as a tool for saving the environment and mass healing. Again the premise was simple: amass large amounts of spiritual energy through prayer and discharge it quickly and decisively to world crises. Energy was to be invoked through the Twelve Blessings, stored in a spiritual energy battery and discharged using the Spiritual Energy Radiator. The mission purportedly helped to arrest disease waves, stimulate international aid and even (in the case of Cyprus in 1974) stop a war.Template:Citation needed

On December 5, 1978, he claims to have received an invitation to visit the mythical city of Shambhala which, it is said, has floated over the Gobi Desert on the etheric plane for hundreds of thousands of years. There he reports having met the being known during his incarnation on Earth as the Buddha.