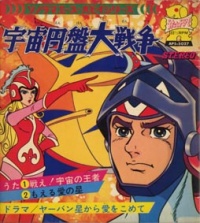 Uchu Enban Daisenso (宇宙円盤大戦争, Uchū Enban Daisensō) alternatively romanized as Uchuu Enban Daisensou, Uchuu Enban Dai-Sensou and other similar variations, translated and also known as Battlefield of The Space Saucers and The Great Battle of the Flying Saucers, is a 1975 animated short film created by Go Nagai and produced by Toei Doga. It is also known as Space Disk War and was also released in Italy under the name La grande battaglia del disco volante spaziale. It was originally shown along with the short film Great Mazinger tai Getter Robot G: Kuchu Daigekitotsu, also from Toei and Nagai. The movie is considered the prototype for the future anime TV series UFO Robot Grendizer, which premiered the same year.

The Yaban forces originate from a planet of the same name and primarily consist of green compact saucers that fire orange lasers, bladed discs, chains, and can morph into wingless dragons or tanks, blue saucers that fire missiles, and the main command ship called the Quinn Byrne. After the destruction of planet Fleed, one of the last survivors, Duke Fleed, stole an experimental giant robot named Gattaiger and fled to Earth where the Yaban attacked every major city. The Yaban forces eventually confront Duke Fleed and the Gattaiger near the end of the movie. Gattaiger's powers include faster than light flight, Spider Spin (a buzzsaw mode used by the Flying Tiger), Needle Shower (needle missiles from the Flying Tiger), Space Thunder (three lasers from each side of the Flying Tiger), and Thunder Focus (combining all six beams into one). After the death of Duke's fiance, Telonna, he leaves Earth with the Gattaiger.