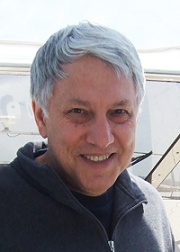 Andrei Dmitriyevich Linde o Andrej Dmitrievič Linde (Андре́й Дми́триевич Ли́нде; born March 2, 1948) is a Russian-American theoretical physicist, the Harald Trap Friis Professor of Physics at Stanford University. Linde is one of the main authors of the inflationary universe theory, as well as the theory of eternal inflation and inflationary multiverse. He received his Bachelor of Science degree from Moscow State University. In 1975, Linde was awarded a Ph.D. from the Lebedev Physical Institute in Moscow. He worked at CERN (European Organization for Nuclear Research) since 1989 and moved to USA in 1990 where he became Professor of Physics at Stanford University. Among the various awards he's received for his work on inflation, in 2002 he was awarded the Dirac Medal, along with Alan Guth of MIT and Paul Steinhardt of Princeton University. In 2004 he received, along with Alan Guth, the Gruber Cosmology Prize for the development of inflationary cosmology. He is a member of the National Academy of Sciences of the USA and of the American Academy of Arts and Sciences.

These observations became the main ingredients of the first version of the inflationary universe theory, which was proposed by Alan Guth in 1980. This theory, which is now called "old inflation," was based on the assumption that the universe was initially hot. It then experienced the cosmological phase transitions and was temporarily stuck in a supercooled metastable vacuum state (false vacuum). Then the universe expanded exponentially (inflated) until the false vacuum decayed, and the universe became hot again. This idea attracted lots of attention because it could provide a unique solution to many difficult problems of the standard Big Bang theory. In particular, it could explain why the universe is so large and so uniform. However, as Guth immediately realized, this scenario did not quite work as intended: the decay of the false vacuum would make the universe extremely inhomogeneous.

In 1981, Andrei Linde developed another version of inflationary theory, which he called "new inflation." He demonstrated that the exponentially rapid expansion of the universe could occur not only in the false vacuum, but also during a slow transition away from the false vacuum. This theory resolved the problems of the original model proposed by Guth, while preserving most of its attractive features. A few months later, a similar scenario was proposed by Albrecht and Steinhardt, with a reference to the paper by Linde. Soon after that, it was realized that the new inflationary scenario also suffered from some problems. Most of them arose because of the standard assumption that the early universe initially was very hot, and inflation occurred during the cosmological phase transitions.

In 1983, Linde abandoned some of the key principles of old and new inflation and proposed a more general inflationary theory, chaotic inflation. Chaotic inflation occurs in a much broader class of theories, without any need for the assumption of initial thermal equilibrium. The basic principles of this scenario became incorporated in most of the presently existing realistic versions of inflationary theory. Chaotic inflation changed the way we think about the beginning of inflation. Later on, Linde also proposed a possible modification of the way in which inflation may end, by developing the hybrid inflation scenario. In that model, inflation ends due to the "waterfall" instability.

Creation of matter in the universe

According to the inflationary theory, all elementary particles in the universe emerged after the end of inflation, in a process called reheating. The first version of the theory of reheating, which is essentially the theory of creation of matter in the universe, was developed in 1982 by Dolgov and Linde, and also by Abbott, Farhi and Wise. In 1994, this theory was revised by Kofman, Linde and Starobinsky. They have shown that the process of creation of matter after inflation may be much more efficient due to the effect of parametric resonance.

Perhaps the most far-reaching prediction made by Linde was related to what is now called the theory of inflationary multiverse, or string theory landscape. In 1982-1983, Steinhardt, Linde and Vilenkin realized that exponential expansion in the new inflation scenario, once it begins, continues without end in some parts of the universe. On the basis of this scenario, Linde proposed a model of a self-reproducing inflationary universe consisting of different parts. These parts are exponentially large and uniform, because of inflation. Therefore for all practical purposes each of these parts looks like a separate mini-universe, or pocket universe, independent of what happens in other parts of the world.

Inhabitants of each of these parts might think that the universe everywhere looks the same, and masses of elementary particles, as well as the laws of their interactions, must be the same all over the world. However, in the context of inflationary cosmology, different pocket universes may have different laws of low-energy physics operating in each of them. Thus our world, instead of being a single spherically symmetric expanding balloon, becomes a huge fractal, an inflationary multiverse consisting of many different pocket universes with different properties. This provided a simple scientific interpretation of the cosmological anthropic principle: Our world may consist of different parts, but we can live only in those parts of the multiverse which can support life as we know it.

These ideas did not attract much attention at that time, in part because the anthropic principle was very unpopular, in part because the new inflationary scenario did not quite work and was replaced by the chaotic inflation scenario. However, in 1986 Linde found that in many versions of the chaotic inflation scenario, the process of exponential expansion of the universe also continues forever in some parts of the universe. Linde called this process eternal inflation. Quantum fluctuations produced during eternal chaotic inflation are so large that they can easily push different parts of the universe from one vacuum state to another, and even change the effective dimensionality of space-time. This provided a very powerful realization of the theory of the multiverse.

A significant advance in this area was obtained when the theory of inflationary multiverse was implemented in the context of string theory. In 2000, Bousso and Polchinski proposed to use the regime of eternal inflation and transitions between many different vacua in string theory for solving the cosmological constant problem. At that time, no stable or metastable vacua of string theory were actually known. A possible mechanism of string theory vacuum stabilization was proposed in 2003 by Kachru, Kallosh, Linde, and Trivedi, who also found that all of these vacua describing expanding universe are metastable, i.e. they must eventually decay. Then Douglas and his collaborators estimated that the total number of different stringy vacua can be as large as 10500, or even more, and Susskind developed the string theory landscape scenario based on investigation of cosmological phase transitions between different string theory vacua.

One of the main challenges of this theory is to find the probability to live in each of these different parts of the universe. However, once string theory is invoked, it is extremely difficult to return to the previous picture of a single universe. In order to do so, one would need to prove that only one of the many vacua of string theory is actually possible, and to propose an alternative solution of the many problems which can be solved by using the anthropic cosmological principle in the context of the theory of inflationary multiverse.

At present Linde is continuing his work on the theory of inflationary multiverse. He is also working on the development of advanced versions of inflationary theory based on string theory and supergravity, which should be flexible enough to properly describe a vast amount of new and upcoming cosmological observational data.

In July 2012, he was an inaugural awardee of the Fundamental Physics Prize, the creation of physicist and internet entrepreneur, Yuri Milner.[1]