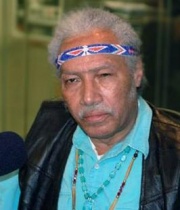 Riley L. Martin (born May 9, 1946) is a self-described alien contactee, author, and radio host. Martin is the author of the book The Coming of Tan,[1] which describes his life and his alleged abduction by aliens. He hosts The Riley Martin Show on the Sirius Satellite Radio channel Howard 101. He had another weekly radio show, The Official Riley Martin Radio Show, but he chose not to continue the show due to financial issues.[2]

Riley Martin was born in Mississippi to a family of sharecroppers of African American and Native American descent.Template:Citation needed He claims he was first abducted by aliens while living in Arkansas in November 1953.[3]

Martin has characterized his interaction with the aliens as positive. The Biaviian alien O-Qua Tangin Wann (also known as Tan), is listed as the co-author of his book.[1] Martin asserts that a significant amount of knowledge was uploaded into his brain by the aliens, including 144,000 different alien "symbols" within a matter of minutes.

Martin claims that these aliens, flying aboard 'The Great Mother Ship' to which he is taken every time he is willingly "abducted," have given him this knowledge so that he can produce and sell hand-drawings of these symbols, which will allow passage aboard the Mother Ship when the Earth is 'transformed' in 2012. Martin claims that each symbol is uniquely tuned to its buyer. Martin did however say on the 29 November 2006 Howard 101 program that “You don’t exactly have to have one of my symbols in order to go,” and stated further that some symbol owners would have their personal reasons for not going, and some Earth populace who had never heard of Riley might be offered the opportunity to participate in the potential airlift. Riley's official website has become the primary platform from which he sells his symbols, the audio book (in his own stentorian voice), a soulful CD of '90s music, and other articles such as Cherokee Nation headbands and talking bobbleheads.

Martin describes seven types of extraterrestrial beings who reside in a mother ship near Saturn:

Other notable appearances on Sirius

References in other media