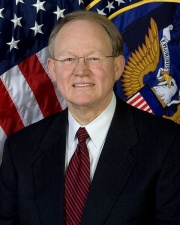 John Michael "Mike" McConnell (born July 26, 1943) is a former vice admiral in the United States Navy. During his naval career he served as Director of the National Security Agency from 1992 to 1996. His civilian career includes serving as the United States Director of National Intelligence from 20 February 2007 to 27 January 2009 during the Bush and seven days of the Obama administration.

McConnell was born and grew up in Greenville, South Carolina.[1] [2] [3] He graduated from Wade Hampton High School, and first attended college at North Greenville Junior College. He holds an M.P.A. from George Washington University, is a graduate of the National Defense University and the National Defense Intelligence College (Strategic Intelligence), and holds a B.A. in Economics from Furman University. He is married to Terry McConnell, and together they have four children and six grandchildren.

McConnell received his commission in the United States Navy in 1967. He worked as the Intelligence Officer (J2) for the Chairman of the Joint Chiefs of Staff and the United States Secretary of Defense during Operation Desert Shield/Storm and the dissolution of the Soviet Union. He developed approaches for improving information flow among intelligence agencies and combat forces in the Gulf War.

From 1992 to 1996, McConnell served as Director of the National Security Agency (NSA). He led NSA as it adapted to the multi-polar threats brought about by the end of the Cold War. Under his leadership, NSA routinely provided global intelligence and information security services to the White House, Cabinet officials, the United States Congress, and a broad array of military and civilian intelligence customers. He also served as a member of the Director of Central Intelligence senior leadership team to address major intelligence programmatic and substantive issues from 1992 until 1996.

McConnell is the second person to hold the position of Director of National Intelligence. He was nominated by President George W. Bush on January 5, 2007, and was sworn in at Bolling Air Force Base in Washington, D.C. on February 20, 2007.[4][5] McConnell's appointment to the post was initially greeted with broad bipartisan support, although he has since attracted criticism for advocating some of the Bush administration's more controversial policies.[6][7]

On Tuesday, August 14, 2007, McConnell visited Texas with House Intelligence Committee chairman Silvestre Reyes to review border security[9], and granted a wide-ranging interview to the El Paso Times newspaper, which surprised many in the intelligence community for its candor on sensitive topics such as the recent changes in the Foreign Intelligence Surveillance Act and the NSA warrantless surveillance controversy. At the end of the interview, McConnell cautioned reporter Chris Roberts that he should consider whether enemies of the U.S. could gain from the information he just shared, leaving it up to the paper to decide what to publish. The El Paso Times put the entire, unexpurgated interview on their website on August 22, with executive editor Dionicio Flores saying "I don't believe it damaged national security or endangered any of our people."[10][11]

A resurgent Taliban is back in charge over parts of Afghanistan, McConnell told CNN on February 27 2008 in an assessment that differed from the one made January 2008 by Defense Secretary Robert Gates.[12]

On 24 January, it was announced that McConnell would return to Booz Allen as a Senior Vice President.[13]

100 Day Plan for Integration and Collaboration

Two months after taking office, McConnell created a series of initiatives designed to build the foundation for increased cooperation and reform of the U.S. Intelligence Community (IC). His plan, dubbed "100 Day Plan for Integration and Collaboration" focused on efforts to enable the IC to act as a unified enterprise in a collaborative manner. [14] It focused on six enterprise integration priorities:

The 100 Day Plan accomplished the launch of a civilian joint duty program, improved security clearance processing times, increased diversity in the intelligence workforce and more information sharing across the community. A 500 Day Plan is being designed to sustain the momentum with an expanded set of initiatives and a greater level of participation. It is set to deepen integration of the Community's people, processes, and technologies. [14][15] The plan will address a new performance management framework that entail six performance elements that all agencies must entail.[16]

500 Day Plan for Integration and Collaboration

The 100 Day Plan was meant to "jump start" a series of initiatives based on a deliberate planning process with specific deadlines and measures to ensure that needed reforms were implemented. The 500 Day Plan, which started in August 2007, was designed to accelerate and sustain this momentum with an expanded set of initiatives and broader IC participation. It contains 10 "core" initiatives which will be tracked by the senior leadership in the Intelligence Community, and 33 "enabling" initiatives. The initiatives are based on the same six focus areas described in the 100 Day Plan.

The top initiatives are:

The IC leadership released Vision2015 in July 2008 as a means to define the objective end-state of Intelligence Transformation. Vision 2015 expands upon the notion of an Intelligence Enterprise, first introduced in the National Intelligence Strategy and later in the 100 and 500 Day Plans. It charts a new path forward for a globally networked and integrated Intelligence Enterprise for the 21st century, based on the principles of integration, collaboration, and innovation. It also makes the argument that the fundamental mission of intelligence is to create a decision advantage for our customers—policymakers, military commanders, law enforcement, and homeland security officials; the ability to collect and analyze intelligence to improve our customer’s ability to make a decision while denying our competitors the same advantage. The Vision establishes some core concepts:

McConnell approached Congress in early August 2007 on the need to "modernize FISA," claiming two changes were needed (initial efforts began in April - see the factsheet for more). First, the Intelligence Community should not be required, because of technology changes since 1978, to obtain court orders to effectively collect foreign intelligence from "foreign targets" located overseas. He also argued that those who assist protecting the U.S. Government must be protected from liability. [18] Shortly thereafter, McConnell took an active role [19] on Capitol Hill for legislation being drafted by Congress. On August 3, McConnell announced that he "strongly oppose[d]" the House's proposal because it wasn't strong enough. [20] After heated debate, Congress updated FISA by passing the Protect America Act of 2007.

In September 10, 2007 testimony before the Senate Committee on Homeland Security and Governmental Affairs, McConnell asserted that the recently passed Protect America Act of 2007 which eased restrictions in the Foreign Intelligence Surveillance Act had helped foil a major terror plot in Germany. U.S. intelligence-community officials questioned the accuracy of McConnell's testimony and urged his office to correct it, which he did in a statement issued September 12, 2007. Critics cited the incident as an example of the Bush administration's exaggerated claims and contradictory statements about surveillance activities. Counterterrorism officials familiar with the background of McConnell's testimony said they did not believe he made inaccurate statements intentionally as part of any strategy by the administration to persuade Congress to make the new eavesdropping law permanent. Those officials said they believed McConnell gave the wrong answer because he was overwhelmed with information and merely mixed up his facts.[21]

McConnell, speaking to a Congressional panel in defense of the Protect America Act, said that the Russian and Chinese foreign intelligence services are nearly as active as during the Cold War.[22] In other September 18, 2007 testimony before the House Judiciary Committee, McConnell addressed the NSA warrantless surveillance controversy, saying that that agency had conducted no telephone surveillance of Americans without obtaining a warrant in advance since he became Director of National Intelligence in February, 2007.[23] McConnell called FISA a "foundational law" with "important legacy of protecting the rights of Americans," which was passed in the era of Watergate and in the aftermath of the Church and Pike investigations. He stressed that changes should honor that legacy for privacy and against foreign threats. [24]

July 2008, Director McConnell issued what many regard as a bold directive (ICD 205)for analysts to build relationships with outside experts on topics of concern to the intelligence community—a recommendation highlighted in the WMD Commission Report. [25]

Director McConnell worked with the White House to overhaul Executive Order 12333, which outlines fundamental guidance to intelligence agencies. McConnell believes the update is necessary to incorporate the intelligence community’s new organizations and new technologies and methods. The redo is expected to help the sixteen intelligence agences work together, and to reflect the post 9/11 threat environment. [26][27][28]

As one of McConnell's last acts as DNI, he intended to sign an intelligence information sharing policy to dramatically increase access to several databases held by various agencies in the community. The policy establishes rules to govern disputes when access is not granted, with the DNI as the final adjudicator to resolve disputes between organizations. [30][31]