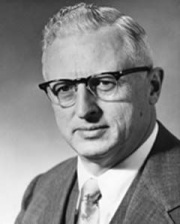 He was one of the leading astronomers of his eraTemplate:Fact, and also earned notoriety as an early skeptic of UFOs as an extraordinary phenomenon.

Born in Florence, Colorado, Menzel demonstrated a precocious intellect: before beginning kindergarten he had not only learned to read but had also learned morse code.Template:Fact

At 16 years old, Menzel enrolled at the University of Colorado to study chemistry. However, observing a solar eclipse in 1918 led him to change his course of study to astronomy. Menzel earned an internship at Princeton University, and spent summer vacations at Harvard University as a research assistant to Harlow Shapley.

Menzel studied at the University of Denver and received his Ph.D. from Princeton. After earning his Ph.D. in 1924, Menzel taught at the University of Iowa and Ohio State University before being hired as assistant astronomer at the Lick Observatory in California in 1926. Menzel was among the first theoretical astrophysicists in the world. He worked at Lick Observatory until 1932 when he accepted a position at Harvard. From 1954-56 he was President of the American Astronomical Society. From 1964 to his death, Menzel was a U.S. State Department consultant for Latin American affairs.

He began teaching at Harvard in 1932, and earned full professorship in 1938; in 1952 he was appointed acting director of the Harvard Observatory, and was the full director from 1954 to 1966, when the observatory became an international center of radio astronomy. He retired from Harvard in 1971.

Menzel initially performed solar research, but later concentrated on studying gaseous nebulae. His work with Lawrence Aller and James Gilbert Baker defined many of the fundamental principles of the study of planetary nebulae.

He wrote A Field Guide to the Stars and Planets, part of the Peterson Field Guides.

In addition to his academic and popular contributions to the field of astronomy, Menzel was a prominent skeptic concerning the reality of UFOs. He authored or co-authored three popular books debunking UFOs: Flying Saucers (book) (1953), The World Of Flying Saucers: A Scientific Examination of a Major Myth of the Space Age (1963), and The UFO Enigma: The Definitive Explanation of the UFO Phenomenon (1977). All of Menzel's UFO books argued that UFOs were nothing more than misidentification of prosaic phenomena such as stars, clouds and airplanes; or the result of people seeing unusual atmospheric phenomena they were unfamiliar with. He often suggested that atmospheric hazes or temperature inversions could distort stars or planets, and make them appear to be larger than in reality, unusual in their shape, and in motion. In 1968, Menzel testified before the U.S. House Committee on Science and Astronautics - Symposium on UFOs, stating that he considered all UFO sightings to have natural explanations.

He was perhaps the first prominent scientist to offer his opinion on the matter, and his stature doubtless influenced the mainstream and academic response to the subject.

Perhaps Menzel's earliest public involvement in UFO matters was his appearance on a radio documentary directed and narrated by Edward R. Murrow in mid-1950. (Swords, 98)

J. Richard Greenwell wrote, "[m]ost UFO advocates considered him an 'archenemy.' Many of his [UFO] explanations were, in fact, reasonable, and Menzel certainly had the technical background to evaluate such data. However, he rarely conducted field checks and limited himself to more theoretical explanations, which, however unlikely, he considered to be more probable than extraterrestrial visitation. He accepted the probability of many technologically advanced civilizations throughout the galaxy, but not that they could easily, and routinely, travel across interstellar distances to earth." (Greenwell, 229)

Some observers have argued that Menzel's UFO works are lacking. Atmospheric physicist and UFO researcher James E. McDonald used the word "Menzelian" to describe the astronomer's approach to UFOs (which McDonald judged inadequate, dismissive and superficial). Sociologist Ron Westrum writes, "The paradox is that his UFO books represent quite shoddy science, in contrast to his better-known work in astrophysics." (Westrum, p 34) Westrum suggests that despite Menzel's "shoddy" UFO studies, "thanks to a type of halo effect, Menzel's reputation in astronomy buttressed his loosely put together scientific arguments." (Westrum, p. 35)

The one [UFO explanation] that received the most publicity was the one offered by Dr. Donald Menzel of Harvard University. Dr. Menzel, writing in Time, Look, and later in his Flying Saucers, claimed that all UFO reports could be explained as various types of light phenomena. We studied this theory thoroughly because it did seem to have merit. Project Bear's physicists studied it. ATIC's scientific consultants studied it and discussed it with several leading European physicists whose specialty was atmospheric physics. In general the comments that Project Blue Book received were, "[Menzel has] given the subject some thought but his explanations are not the panacea."[1]

Menzel's critics also report that his UFO theories were literally laughable. He was an occasional consultant to the Condon Committee (1966-1968), a scientific study of UFOs, lead by physicist Edward Condon at the University of Colorado. Jacques Vallee recorded in his diary a story related to him by astronomer and Committee consultant J. Allen Hynek. While dining one evening, Hynek and some of the Committee's regular members

discussed Menzel's recent trip to Boulder. Mary Lou [Armstrong, the Committee's executive assistant] laughed so hard as she recalled Menzel's speeches that she fell from her chair and landed flat on her back on the restaurant floor. Menzel's explanations for the [UFO] cases were so ridiculous that only propriety and respect for a senior colleague prevented the members of the team, including Condon, from laughing openly in his face. (Westrum, 35)

Though most of Menzel's harshest critics were UFO researchers, negative criticism came from other fields: in 1959, prominent psychologist Carl Jung declared that Menzel "has not succeeded, despite all his efforts, in offering a satisfying explanation of even one authentic UFO report." (Jung, 147) Damning criticism also came from an internal U.S. Air Force analysis, which stated:

It is easy to show that the "air lenses" and "strong inversions" postulated by Gordon and Menzel, among others, would need temperatures of several thousand kelvins in order to cause the mirages attributed to them.[2]

However, Menzel's involvement in the phenomenon can be traced to a UFO encounter he reported to the U.S. Air Force in 1949. This report did not become public until the 1970s, when Brad Sparks uncovered the report, and wrote an article on the event. (Clark, p. 387)

On May 12, 1949, Menzel and a chauffeur left Holloman Air Force Base, bound for Alamogordo, New Mexico. At about 9.30 p.m., he noted two bright stars in the sky and initially thought them the stars Castor and Pollux. Though apparently motionless, the stars seemed to grow brighter, and Menzel reported that he realized the lights were in the wrong position to be Castor and Pollux. He described the lights as "very nearly identical in diameter, nearly one-half the size of the full moon." (Clark, p. 388)

A few quick tests established that the lights were not due to reflections on either Menzel's eyeglasses or the car's windows. He watched the lights for about four minutes before one of them suddenly seemed to vanish. Menzel wrote that he then concluded he was observing something "exceptional" and told the chauffeur to stop the car. But just as he was speaking, the second light vanished as well. (Clark, 388)

In his formal report submitted to the Air Force only four days after the encounter, Menzel sketched the two round lights as he saw them, and included a few of his own calculations: if the lights had indeed been motionless, they must have been about "180 miles away" and quite large, perhaps "3/4 of a mile". (He noted that if the lights had been closer and/or in motion, their size could have been smaller.) Ultimately, he regarded the sighting as quite perplexing. (Clark, 388)

Menzel revisited the sighting in his first UFO book, Flying Saucers: (1953), and suggested that while he could not "explain the phenomenon in every detail" it was probably "merely a reflection of the moon" which had been "distorted by a layer of haze". It might be compared to "a person riding in a fast motorboat. He might see the moon reflected in the bow wave thrown up by the boat. But the reflection would vanish when the boat stopped." (Clark, 388)

However, Menzel's later account differs from his first in a few critical ways:[3]

Physicist and UFO researcher Stanton Friedman reported that his own research (including examination of Harvard University archives) showed that Menzel had served as a consultant to the National Security Agency.

The fact that Menzel had security clearance and worked with the U.S. government is not on its own extraordinary; many scientists participate in sensitive duties for the U.S. government. What is somewhat unusual about Menzel's case, is that he held the rarefied "Top Secret Ultra" clearance, and as Westrum notes, that Menzel's dual membership "in the academic community and in the black world of military secret projects [were] apparently unknown to many colleagues and military contacts in the [U.S. Air Force's] Air Technical Intelligence Center." (Westrum, fn, p. 36)

Friedman argues that Menzel's high-level clearance is evidence in favor of the existence of MJ-12, supposedly a secret governmental UFO study group established in 1947 which allegedly included Menzel in its membership. Friedman had earlier been baffled by Menzel's appearance on the list of purported MJ-12 members: though Menzel was a leading astronomer, he was (as of 1984 when the MJ-12 documents first surfaced), the only purported MJ-12 member who did not have extensive ties to the U.S. military or government. Only later, when the extent of Menzel's decades-long involvement with U.S. Military intelligence, did Menzel's name make sense on the list of MJ-12 members. Friedman then concluded that Menzel's shoddy "debunking" had not been "bad science", but a deliberate attempt to reduce public and professional interest in UFOs.

Given the near-consensus[3] within the UFO research community that the MJ-12 never existed (at least by that name) and the documents supporting its reality are hoaxes or so dubious as to be unreliable, Friedman's interpretation of Menzel's security clearance is in the minority.

Also cited as possible evidence against Menzel's membership or involvement in MJ-12 is his 1949 report of a UFO encounter to the U.S. Air Force. This report was publicly unknown for nearly three decades, before being found by Sparks. Sparks has argued[3] that if Menzel was truly privy to secret UFO information since 1947 — when MJ-12 was supposedly founded — then Menzel would have no reason to send a "confidential" UFO report to the Air Force two years later for an account he thought "exceptional". Furthermore, Menzel's 1949 report makes no mention of any such group as MJ-12. Against this it has been arguedTemplate:Fact that MJ-12 was the alleged control group, but the detailed UFO data collection was being carried out by other, lower-classified government intelligence groups, such as Project Grudge, then the Air Force's official public UFO study. Thus there would be no reason for Menzel to not report his sighting for Project Grudge to incorporate into their statistics. There would also be no reason for Menzel to mention the "supersecret" MJ-12 group, particularly to members of the lower-classified Grudge.

UFO debunker Philip J. Klass, who found discrepancies in the documents and concluded they were faked, wrote:

The addition of the name of Dr. Donald Menzel, a world-famous astronomer and leading UFO-debunker, is an attempt at revenge by the MJ-12 counterfeiter. Menzel was hated and maligned by the "UFO-believers" during the first two decades of the UFO era. In the eyes of a UFO-believer, there could be only one thing worse than being a UFO-debunker—and that is a debunker who knowingly resorted to falsehood. The counterfeiter tried to heap this final indignity on a world-famous scientist, now deceased, by listing him as a member of MJ-12. (Recently I was told by one UFOlogist that he suspected that I had replaced Menzel on MJ-12 following his death.) (Klass 1988:286-87)