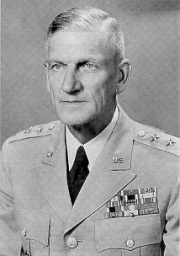 General Robert M. Montague was director of the Anti-Aircraft and Guided Missiles Branch of the U.S Army Artillery School. He was also commanding general of the Atomic Energy Commission installation of Sandia Base in Albuquerque. It has been stated "If a saucer had actually crashed in New Mexico, he would have known. And if an operation were mounted to shoot these intruders out of the skies, he would have been in charge of organizing it."