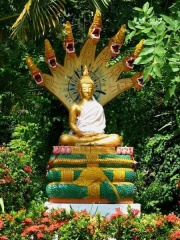 Mucalinda, Muchalinda or Mucilinda is the name of a naga (a snake-like being), who protected the Buddha from the elements after his enlightenment.

It is said that four weeks after Śākyamuni Buddha began meditating under the Bodhi tree, the heavens darkened for seven days, and a prodigious rain descended. However, the mighty king of serpents, Mucalinda, came from beneath the earth and protected with his hood the one who is the source of all protection. When the great storm had cleared, the serpent king assumed his human form, bowed before the Buddha, and returned in joy to his palace.

The subject of Buddha meditating under the protection of Mucalinda is very common in Lao Buddhist art. A particularly striking (unconventional) gigantic modern rendition is present in Bunleua Sulilat's sculpture park Sala Keoku.

The legend of Mucalinda (Muchalinda) is prominently featured in Aldous Huxley's novel Island where it functions as a metaphor of communion between humans and nature, in opposition to the Christian and scientific hostile/cautious view of snakes in the Western culture.