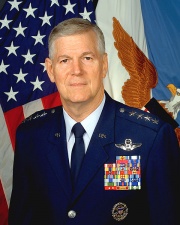 Richard Bowman Myers (born March 1, 1942) is a former four-star general in the United States Air Force and served as the 15th Chairman of the Joint Chiefs of Staff. As Chairman, Myers was the United States military's highest ranking uniformed officer.

General Myers became the Chairman of the Joint Chiefs on October 1, 2001. In this capacity, he served as the principal military advisor to the President, the Secretary of Defense, and the National Security Council during the earliest stages of the War on Terror, including planning and execution of the 2003 invasion of Iraq. On September 30, 2005, he retired and was succeeded by General Peter Pace. His Air Force career included operational command and leadership positions in a variety of Air Force and Joint assignments.

Myers was born in Kansas City, Missouri. He graduated from Shawnee Mission North High School in 1960. He graduated from Kansas State University with a B.S. in mechanical engineering in 1965 where he was a member of Sigma Alpha Epsilon fraternity. He graduated from Auburn University with a M.B.A. in 1977. The General has attended the Air Command and Staff College at Maxwell Air Force Base, Alabama; the U.S. Army War College at Carlisle Barracks, Pennsylvania; and the Program for Senior Executives in National and International Security at Harvard University's John F. Kennedy School of Government.

From August 1998 to February 2000, General Myers was Commander in Chief of the North American Aerospace Defense Command and U.S. Space Command; Commander of the Air Force Space Command; and Department of Defense manager of the space transportation system contingency support at Peterson Air Force Base, Colorado. As commander, General Myers was responsible for defending America through space and intercontinental ballistic missile operations. Prior to assuming that position, he was Commander, Pacific Air Forces, Hickam Air Force Base, Hawaii, from July 1997 to July 1998. From July 1996 to July 1997 he served as Assistant to the Chairman of the Joint Chiefs of Staff at the Pentagon; and from November 1993 to June 1996 General Myers was Commander of U.S. Forces Japan and 5th Air Force at Yokota Air Base, Japan.

On 27 September 2005, only three days before leaving his post as Chairman, Myers said of the war in Iraq that, "the outcome and consequences of defeat are greater than World War II." His rise to and stint as Chairman are chronicled in Washington Post reporter Bob Woodward's book, State of Denial, as well as his own book "Eyes on The Horizon"

On November 9, 2005, Myers received the Presidential Medal of Freedom. His citation reads: Template:Cquote

In 2006, General Myers accepted a part-time appointment as a Foundation Professor of Military History at Kansas State University. That same year, he was also elected to the Board of Directors of Northrop Grumman Corporation, the world’s third largest defense contractor. On 13 September 2006, he also joined the board of directors of United Technologies Corporation. He also resides on the boards of Aon Corporation, John Deere, the USO and holds the Colin L. Powell Chair for National Security, Leadership, Character and Ethics at the National Defense University.

General Myers and his wife, the former Mary Jo Rupp, have three children: two daughters and a son. General Myers appeared on Mad Money with Jim Cramer on March 16, 2009.