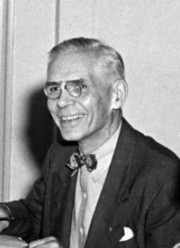 Born in Lockport, New York, Nourse moved to a western suburb of Chicago at the age of four months, and considered himself a Midwesterner. His father worked in the city as a supervisor of public school music. His sister, Alice Tisdale Hobart, went on to become a bestselling novelist. In high school Nourse enjoyed English and history, and after spending a year at the Louis Institute, went on to Cornell University with an interest in civil engineering. In 1903 he was caught in a wave of typhoid fever that hit campus; upon his return he decided to simply get his A.B., but also took several classes at the College of Agriculture.[1]

Following college, Nourse taught for two years in high school, spent a year on graduate studies, and then came to teach at the Wharton School, where he conceived of agricultural economics. From there he transited through the University of South Dakota, the University of Arkansas, Iowa State College, and on to the University of Chicago, where he received his Ph.D for the dissertation "Market Mechanism as a Factor in Price Determination". He continued to study and write about agricultural cooperation.[1]

Two years later in July he met President Harry S. Truman for the first time by way of Charles Griffith Ross to speak about becoming member of the newly created Council of Economic Advisors; Nourse subsequently resigned from Brookings to become its first chairman, with Leon Keyserling as his vice-chairman and John Clark as a member.[1]