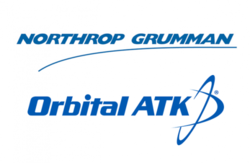 Orbital ATK Inc. is an American aerospace manufacturer and defense industry company. It was formed in 2015 from the merger of Orbital Sciences Corporation and parts of Alliant Techsystems. Orbital ATK designs, builds and delivers space, defense, and aviation-related systems to customers around the world both as a prime contractor and as a merchant supplier. It has workforce of approximately 12,000 employees dedicated to aerospace and defense including about 4,000 engineers and scientists; 7,000 manufacturing and operations specialists; and 1,000 management and administration personnel.

A merger of Orbital Sciences Corporation and the defense and aerospace divisions of Alliant Techsystems (ATK) was announced on April 29, 2014. The two companies had collaborated on several previous projects, including the use of 400 ATK rocket motors in Orbital's launch vehicles. The deal officially closed on February 9, 2015. ATK's sporting-goods division spun off to form Vista Outdoor on the same day.

On September 18, 2017, Northrop Grumman announced plans to purchase Orbital ATK for $7.8 billion in cash plus assumption of $1.4 billion in debt. Orbital ATK shareholders approved the buyout on November 29, 2017. Closing of the deal is expected in the first half of 2018 pending regulatory approval.

Based in Chandler, Arizona, the Flight Systems Group includes the Pegasus, Minotaur, and Antares launch vehicles as well as solid-propulsion and aerostructures programs. The company also operates a Lockheed L-1011 TriStar wide body jetliner which is named Stargazer and is used to air launch Pegasus rockets carrying payloads into space. The Stargazer aircraft is also used for testing under specific programs.

The Defense Systems Group, based in the Baltimore, Maryland area, produces tactical missiles, defense electronics, and medium- and large-caliber ammunition. The division also produces fuzing and warheads for both tactical missiles and munitions; precision metal and composite structures for medium and large-caliber ammunition, military aircraft, ground vehicles, and missile systems; load, assembly, and pack (LAP) of medium caliber munitions; and propellants and powders for the canister and commercial markets.

Orbital ATK's Space Systems Group provides satellites for commercial, scientific, and security purposes. This group also produces the Cygnus spacecraft, which delivers cargo to the International Space Station. The group is based at the company's headquarters in Dulles, Virginia.