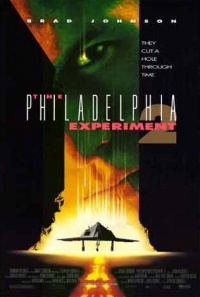 It is several years after the events of the first movie, and David Herdeg (the survivor of the Philadelphia Experiment from the first film) and Allison (the woman from 1984 he fell in love with) have married and have a child. David awakes, in agony, to a changed world. Germany won World War II and the United States is now about to mark 50 years as a Nazi conquest. The local political leader is trying to find the right music for a commemorative video of "Fifty Glorious Years". Yet, social conditions are authoritarian with people under a high degree of control from day to day.

It turns out that Germany won the war because its futuristic aircraft, called the Phoenix, was used to deliver an atomic bomb to destroy Washington DC and a few other targets on the East coast of the USA. After that the US was demoralized and surrendered to Nazi Germany. The aircraft was destroyed in the explosion, and the scientist who claimed he built it was ridiculed because he was unable to build another. The aircraft (a stealth F-117 Nighthawk) came from the future - the scientist's son, an American engineer, was working on an aircraft teleportation system using technology not entirely unrelated to the Philadelphia Experiment. The idea is to "beam" a bomber into a high-risk area to surprise enemy air defenses and hit a target before they can react. The first test of the device is an attempt to transport an F-117 with a payload of tactical nuclear bombs to the US Air Force base at Rammstein, Germany. While the F-117 was successfully teleported to Rammstein, it passed through time, arrived there in 1943, and landed in the hands of the Nazis... including the scientist's father who would tell the Nazis that he built it.

To successfully travel through time the son needs a sample of David's blood. Somehow David must travel back in time to 1943 to Germany, intercept the aircraft's arrival, and keep it from being used by the Nazis. In the end, the German scientist is killed, and his son from the future disappears, eliminating the development of the aircraft and restoring the time line to normal.