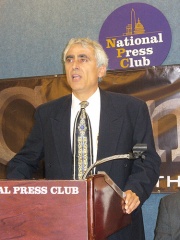 Michael Emin Salla (September 25, 1958) is an international politics scholar who in 2001 became interested in the study of exopolitics and subsequently embarked on a personal effort to disseminate his exopolitical beliefs and hypotheses via the mediums of the internet, UFO and News conferences and radio appearances. Salla's most recent academic position was in Washington at American University, Center for Global Peace. The Center did not sanction his ufological research, and emphasizes that it is personal.[1] Controversy eventually led to Salla's dismissal from the university.

His unconventional views have made his work the subject of considerable controversy and criticism within both the ufological and mainstream academic communities. Much of the testimony he uses to support his position is controversial due to a lack of empirical evidence to substantiate many of the claims. While many of Salla's sources are considered to be credible by adherents to the UFO Disclosure movement who cite a variety of supporting documents and credentials, critics argue these sources have been discredited for a variety of reasons; among these the dissemination of patent falsehoods in the content of claims made, and the misrepresentation of credentials.

In his early academic career in the 1990s Salla specialized in conflict resolution. He researched ethnic conflicts in Kosovo, East Timor, and Sri Lanka and worked to stop them occurring.[1][2] He led a series of workshops bringing together East Timorese and Indonesian intellectuals to develop a power sharing document to resolve the East Timor conflict. The resulting document was incorporated into the 1999 U.N. supervised referendum voted upon by the East Timorese. On September 1998 in Boston, Salla was one of three panelists who took part in the first American Political Science Association (APSA) discussion on negotiation of global violence and conflict.[3]

A feature article on his suggestion that a visit to the dentist by President Eisenhower in 1954 was actually a meeting with extraterrestrials was published in the Washington Post on February 19, 2004.[1] This created tension with the Center for Global Peace that did not wish to be publicly associated with his "new direction in research".[6] In April 2004, he participated at the X-Conference which led to more public prominence and further threatened his university position.[7] On May 13, 2004, Abdul Aziz Said, Director of American University's Center for Global Peace, sent a letter [8] of dismissal to Salla, citing unauthorized changes Salla had made to the Peace Ambassador Program as the primary reason for Salla's dismissal. The letter also stated that Salla's formal affiliation with American University would not be rescinded, but neither would it be renewed upon its expiration in August 2004.

In April 7, 2005, Salla founded the Exopolitics Institute (ExoInst), a UFO research organization that is currently headquartered in Kealakekua, Hawaii. On June 4, 2006, Al Jazeera published an article discussing a letter Salla had sent them informing them about the possibility of alien intervention in order to prevent a nuclear attack on Iran by the United States of America.[9] From June 9 - 11, 2006, he assembled and took part in the Hawaii Conference on World Peace and Extraterrestrial Civilizations.[4][9]

His current exopolitical interests have led him to assert that the undisclosed presence of extraterrestrials is one of the primary forces behind international conflict. He further states that the claims of various "whistleblowers" (informants) suggest that as many as sixteen different extraterrestrial civilizations are currently interacting with the human race while a number of other extraterrestrial races monitor Earth affairs, while avoiding contact. Most of his claims are derived from whistleblowers (informants) or 'experiencers' (individuals who claim to have contacted extraterrestrials) who, while arousing much debate in the UFO field, are alleged by Salla to be primary sources of reliable information. In conversation with the Washington Post, Salla pointed to evidence widely available on the internet as a source for his research on extraterrestrial visitation: "There's a lot of stuff on the Internet, and I just went around and pieced it together."[1]

Michael Salla lives in Hawaii with his wife, Angelika Whitecliff.

Reviewed in American Political Science Review June 1996 v90 n2 p471(1) "This is an interesting and valuable, albeit somewhat vexing, book."

The concept of Exopolitics was formulated by Michael Salla. He authored a book on exopolitics in which he claims that a 1954 dentist appointment by U.S. President Dwight D. Eisenhower was a cover for a secret meeting with extraterrestrials.[10]

Salla claims that President Eisenhower "met with two ETs with white hair, pale blue eyes and colorless lips," referred to by alien enthusiasts as "Nordics." He told the Washington Post that "The "Nordics" offered to share their superior technology and their spiritual wisdom with Ike if he would agree to eliminate America's nuclear weapons." Salla says the President declined the offer.[10] He also told the newspaper that President Eisenhower had agreed with another race of aliens that they could take livestock and humans with them for the purposes of experiments. He estimated that those aliens had taken "millions" of humans.

Salla admitted to the Washington Post that the evidence supporting his claims about the existence of aliens was found by him "on the internet." [10]

Advocates for exopolitics and the existence of extraterrestrials have speculated about establishing relations with extraterrestrials and taking advantage of their presumed knowledge of sustainable energy sources and other matters of global importance.[11] Former Canadian Defence Minister Paul Hellyer joined three fringe groups in urging the Canadian parliament to hold public hearings on exopolitics in 2005.[12]

The fifth X-conference on exopolitics was attended by 400 people at a hotel's banquet hall in suburban Maryland.[13] Attendees included 2008 Utah Congressional Candidate Joseph Buchman Phd, hypnotherapist Rebecca Hardcastle, lawyer Alfred Webre, Apollo 14 astronaut Dr. Edgar Mitchell, US Air Force pilot Dr. Milton Tores, and institute founder Michael Salla. The conference included lectures on document disclosure, discussions of black budgets and quantum cosmology, and the sale of books such as Exopolitics: How Does One Speak to a Ball of Light?. [13] Advocates of exopolitics want mankind to deal with "rule of law in outer space, the sharing of technology between civilisations, and the physics of one-on-one interaction with ETs".[13] An exopolitics conference was also held in June 2009 in Leeds with the Starchild skull featured as a "star" attraction.[14]