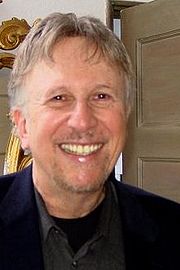 Jack Sarfatti (born September 14, 1939) is an American theoretical physicist. He is known for his iconoclastic ideas, and is interested in what he sees as the breakdown of the paradigm that posits science and the humanities as separate disciplines, arguing that physics [1] has replaced philosophy as the unifying force between science and art.[2].

Sarfatti was born in Brooklyn, New York to Hyman Sarfatti, an Italian Sephardi mystic[3] from Macedonia and his wife Mildred.[4] He received a B.A (1960; Cornell) and a Master's (1967; UCSD) degree in physics. While working as an assistant professor at San Diego State University (1967-71), Sarfatti obtained a Ph.D (1969) from University of California, Riverside[5] under the supervision of Fred Cummings. In 1975, Sarfatti left academia and founded the Physics Consciousness Research Group to do research on parapsychological phenomenon such as telepathy.