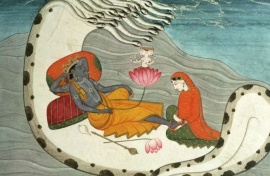 Vishnu resting on Ananta-Shesha, with Lakshmi massaging his "lotus feet."

In Hindu (Vedic) tradition, Shesha (Śeṣa in IAST transliteration, Devanagari: शेष) or Adi-shesha (Sheshanaag) is the king of all nagas, one of the primal beings of creation, and according to the Bhagavata Purana, an avatar of the Supreme God[1] known as Sankarshan. In the Puranas, Shesha is said to hold all the planets of the Universe on his hoods and to constantly sing the glories of Vishnu from all his mouths. He is sometimes referred to as "Ananta-Shesha" which means "Endless Shesha" and as "Adishesha", which means First snake. 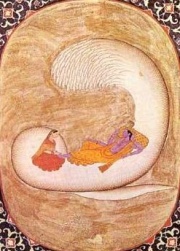 Shesha is generally depicted with a massive form that floats coiled in space, or on the universal ocean, to form the bed on which Vishnu lies. Sometimes he is shown as five-headed or seven-headed, but more commonly as a many hundred-headed serpent, sometimes with each head wearing an ornate crown.

He is closely associated with Vishnu. His name means "that which remains", from the Sanskrit root śiṣ, because when the world is destroyed at the end of the kalpa, Shesha remains as he is.

Balarama, Lakshmana, and Nityananda Prabhu, are considered avataras of Shesha (or vice versa). Patañjali is also considered an emanation or incarnation of Shesha and is iconographically depicted in naga form with naga canopy. In a story from the Puranas, Shesha loosens Mount Mandara, to enable it to be used in the churning of the ocean by the devas and asuras. According to the Mahabharata (Adi Parva), his father was Kashyapa and his mother Kadru. The city of Thiruvananthapuram is named after him as the "City of Lord Ananta". 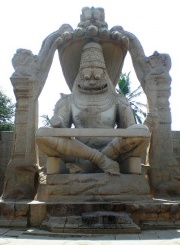 Narasimha, the man-lion inacarnation of Vishnu seated on the coils of Shesha, with seven heads of Shesha forming a canopy. statue at Vijayanagara. 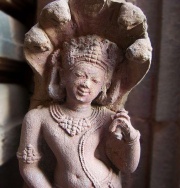