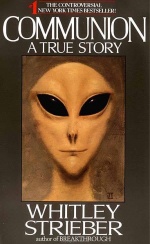 Communion is a book by American ufologist and horror author Whitley Strieber that was first published in February of 1987. The book is based on Strieber's own alleged experiences with non-human, possibly extraterrestrial entities.[1]

Communion was a Number 1 New York Times bestseller in the Non-Fiction category, and was on the list for fifteen weeks in hardcover and for thirty-six weeks in paperback. Hardcover sales neared 300,000. Paperback sales exceeded 2,000,000. It was the 3rd bestselling mass market paperback of 1988.

A 2008 trade paperback edition presents a new preface by the author.

The cover painting of an alien was rendered by Ted Seth Jacobs. The painting is considered one of the most widely-recognized popular culture images of a "grey" alien. "The Communion cover," Jacobs recounts, "was painted in my small apartment on East 83rd St, in New York City. Whitley sat with me first for a drawing of the Alien. As I sketched, he would indicate how to change the portrait so that it would more match what he saw. It was, I believe, the process used by police sketch artists. Every last detail was corrected according to his instructions. At one point, he said the image corresponded exactly to what he had seen. With Whitley beside me for the subsequent session, I began to paint the image on a wooden prepared panel, going through the same process as for the drawing, until Whitley finally said the image was exact. ...As to the gender of the Alien image, to tell the truth, the subject didn't come up. I don't even know if the 'greys' have gender as we understand it. Whitley corrected the developing image to have a certain fragility, a vulnerability. I suppose we Earthlings usually associate these qualities with femininity."[2]

The book was later made into a film directed by Philippe Mora and starring Christopher Walken as Strieber.

The band PG.99's song "By the Fireplace in White" contains someone reading passages from the book at the end of the song.

Swedish Progressive Metal band Evergrey wrote their 2001 concept album, In Search of Truth, around the ideas presented in "Communion" after the band's singer Tom S. Englund read the book.