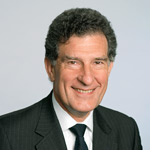 Sir Kevin Reginald Tebbit KCB CMG (born 1946 [1]) was a British civil servant. From January to July 1998, Tebbit was director of GCHQ [2][3]. Following this he became the Permanent Under Secretary of State for the Ministry of Defence before retiring in November 2005 to take up posts in industry and academia [4].

Tebbit was educated at the Cambridgeshire High School for Boys and St John's College, Cambridge [1].

He is a governor of the conference-organising Ditchley Foundation, based at Chipping Norton [5].

He is Visiting Professor in history at Queen Mary, University of London. He is chairman of the defence company Finmeccanica UK. He holds a number of other business appointments [6].

5^ The Ditchley Foundation: The Governors