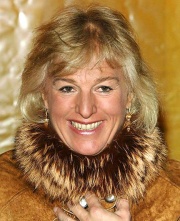 Carol Thatcher (born 15 August 1953) is a British journalist, author, and media personality. She is the only daughter of Margaret Thatcher, Baroness Thatcher, a former British Prime Minister, and Sir Denis Thatcher, Bt.

Thatcher has published biographies of both her parents. Additionally, she produced a documentary of her father which contained his only public interview[1]. Thatcher won the 5th Season of the reality show I'm a Celebrity... Get Me Out of Here!. In early 2009, she was removed from her on-air position at BBC One after making an off-air comment backstage considered to be a racial pejorative about tennis player Jo-Wilfried Tsonga [2].

Carol Thatcher and her twin brother, Sir Mark Thatcher, Bt, were born six weeks prematurely in 1953. According to Thatcher, Denis Thatcher responded to seeing his offspring for the first time; "My god, they look like rabbits. Put them back."[3] Margaret Thatcher was selected for Finchley in 1958 and was elected as a member of Parliament in 1959. [4][5] The following year, Thatcher was sent to be educated at St Paul's Girls' School[6]. Thatcher studied law at University College London before moving to Australia in 1977 to begin a journalism career[6]. While there, her mother was elected Prime Minister. Thatcher has said; "You need quite good shock absorbers and a sense of humour to be the Prime Minister's child."[6]

Thatcher began her journalism career in Australia, working on the Sydney Morning Herald from 1977 to 1979. She became a TV reporter at Channel Seven, also in Sydney, and later an interviewer on its morning show. On her return to Britain, she worked as a presenter for LBC, BBC Radio 4, TV-am and wrote travel articles for The Daily Telegraph. Due to her mother's high profile political position, many newspapers refused to publish work with her byline.[7] [8]

Thatcher published her first novel, Diary of an election: with Margaret Thatcher on the campaign trail in 1983. Her second book, a collaboration with tennis player Chris Evert called Lloyd on Lloyd, was released three years later. It became Thatcher's first best-seller.[8][9]

Later publications included a 1996 best-selling biography of her father, Below the Parapet.[8] In 2003, Thatcher produced a Channel 4 documentary about him called Married to Maggie. Thatcher captured the only public interview Denis Thatcher gave in his lifetime; he died shortly after its release.[10][11] Thatcher's freelance career has contributed articles to magazines and papers as well as television.[12][11]

Template:Wikinews From 2006 to 2009, Thatcher was a freelance contributor to the BBC One magazine programme The One Show, making regular filmed reports and joining the presenters and guests in the studio for discussions. On 3 February 2009, British media reported that during the 2009 Australian Open Thatcher had, in a conversation in the show's green room, referred to a black[13] tennis player, reportedly Jo-Wilfried Tsonga, as a golliwog.[14]

According to The Times, Thatcher called Tsonga "half-golliwog" and "the golliwog Frog".[15] Presenter Adrian Chiles, comedian Jo Brand, journalists and several guests[16] were with Thatcher when she made the remark. When others protested about her use of the word, Thatcher stated through her spokesperson that the comment was meant in jest.

The BBC stated that Thatcher would not work again on The One Show unless she made a more sincere apology.[17] Thatcher refused, saying "I stand by what I said. I wasn't going to apologise. I never meant it in a racist way. It was shorthand. I described someone's appearance colloquially – someone I happen to greatly admire." [12]

Template:Main In November 2005 Thatcher was selected to appear with a number of fellow celebrities on the popular ITV television show I'm a Celebrity... Get Me Out of Here!. The format of the show meant that she would be forced to spend at least a week in the Australian rainforest with a minimal supply of food in basic living conditions.

She had to undergo one of the more infamous 'Bushtucker Trials' during her stay in the jungle — which saw her being forced to eat jungle bugs and kangaroo testicles to help sustain her fellow celebrities. Ultimately, she emerged as the fifth series winner and second 'Queen of the Jungle'. [18]

DNA tests in association with a reality TV programme 100% English screened on Channel 4 on 13 November 2006 indicate that Thatcher may be descended from a Bedouin tribe, or that her origins may date to the desert farmers of ancient Mesopotamia, which centuries ago covered all of Iraq and large portions of contemporary Turkey, Syria and Iran.[19]

Thatcher appeared on LIVINGtv show Most Haunted on 13 February 2007 as a celebrity guest alongside presenter Yvette Fielding and Medium David Wells to search for paranormal activity at Tatton Hall in Cheshire.

In 2007, Carol Thatcher travelled to the Falkland Islands and Argentina for the documentary Mummy's War, in order to explore the legacy of the Falklands War. Whilst receiving a highly positive reception from the pro-British islanders (who regard her mother as a heroine), her reception in Argentina provoked protests and demonstrations (including the cry "your mother is a war criminal!"). During her stay in Argentina she met a group of mothers who lost their sons during the conflict and stated, "We were fighting a war; we won, you lost" and reminding them that it was their country that invaded the islands, thus initiating the conflict. The interview ended with one of the women claiming that "God will punish her [Margaret Thatcher]".

Thatcher has written several books, including: Below the Parapet: the Biography of Denis Thatcher (1996) and Diary of an Election: with Margaret Thatcher on the Campaign Trail (1983). On 4 September 2008 Headline Publishers released "A Swim on Part in the Goldfish Bowl: A Memoir", which recounts the decline of Margaret Thatcher's health and the onset of her dementia.[20]

Thatcher had a relationship with Jonathan Aitken which ended in 1979,[21] just after the Conservatives won that year's general election. His severing of the liaison is alleged to have been the reason for Aitken being bypassed for a ministerial career; the Prime Minister reportedly told cabinet colleagues that she was damned if she was going to give a job to a man "who had made Carol cry".[3][22]

Thatcher has been linked to Marco Grass, a Swiss ski instructor since 1992. They share her homes in Klosters and London. Thatcher has never married; "I like being permanently single. It suits me perfectly." [23]