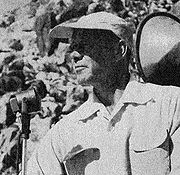 George Van Tassel (March 12, 1910 - February 9, 1978) was an American contactee, ufologist, and paranormal research leader who commenced building the Integratron in 1958 in Landers, California.

Van Tassel was born in Jefferson, Ohio and grew up in a fairly prosperous middle-class family. He dropped out of high school in the 10th grade and got a job at a Cleveland airport; he also got a pilot's license. At 20, he headed for California, where at first he worked for a garage owned by an uncle.

While working at the garage he met Frank Critzer, an eccentric loner who claimed to be working a mine somewhere near Giant Rock, a 7-story boulder near Landers, California. Frank Critzer was a German immigrant trying to make a living in the desert as a prospector. During World War II, Critzer was under suspicion as a German spy and died during a police siege at the Rock in 1942. Upon receiving news of Critzer's death, Van Tassel applied for a lease of the abandoned airport near Giant Rock from the Bureau of Land Management, who managed the land, and was eventually given a renewable Federal Government contract to develop the airstrip.

Van Tassel became an aircraft mechanic and flight inspector who at various times between 1930 and 1947 worked for Douglas Aircraft, Hughes Aircraft, and Lockheed. While at Hughes Aircraft he was the Top Flight Inspector. He finally left Southern California's booming aerospace industry for the desert in 1947. He and his family at first lived a simple existence in the rooms Frank Critzer had dug out under Giant Rock. Van Tassel eventually built a home, a cafe, a small airstrip, and a dude ranch beside the Rock.

Meditating beside Giant Rock in 1951, Van Tassel claimed to have been transported astrally to a huge alien space ship orbiting the earth, where he met the all-wise "Council of Seven Lights." In 1952 Van Tassel reported he had been visited in the flesh by human-appearing, friendly space aliens from Venus, who suggested that he attempt to build a structure aimed at extending human life, to help people take advantage of the wisdom acquired through age. It was of course the Integratron, and it became his apparent obsession for the next 25 years. The structure actually was finished by 1959, but seemed completely non-functional; Van Tassel tinkered with it fruitlessly for the rest of his life.

It was supposedly a domed time/energy machine built partially upon the theories of Nikola Tesla. Created to recharge and rejuvenate people’s cells, at the behest of an advanced entity with which Van Tassel communicated telepathically, for a coming “Lord” from outer space, it was however not without its risks, according to Van Tassel's theory. An overcharge could make a person spontaneously combust -- or even explode. The wood structure lacks a rotating metal apparatus on the outside which was to be the functioning part. Now it is simply an empty all wood dome, lacking even metal screws or nails. In recent times New Agers have declared the structure a power spot and claim to be rejuvenated by staying there, and experiencing sound baths inside.

Van Tassel was a classic 1950s contactee in the mold of George Adamski, Truman Bethurum, Orfeo Angelucci and many others. He hosted The Giant Rock Spacecraft Convention annually beside the Rock, from 1953 to 1978, that attracted at its peak in 1959 as many as 10,000 attendees. Guests trekked to the desert by car or landed airplanes on Van Tassel's small airstrip, grandly called Giant Rock Airport.

Every famous contactee appeared personally at these conventions over the years, and many more not-so-famous ones. References often state that the first and most famous contactee, George Adamski, pointedly boycotted these conventions. In fact, however, Adamski attended the third convention, held in 1955, where he gave a 35-minute lecture and was interviewed by Edward J. Ruppelt, once head of the Air Force Project Blue Book. It was the only such convention Adamski attended.

Like most 1950s contactees, he founded a paranormal research organization calledThe Ministry of Universal Wisdom, and The College of Universal Wisdom to codify the spiritual revelations he was now continually receiving via "psychic resonance" with the Space Brothers.

Van Tassel's now-rare book, I Rode a Flying Saucer(1952, 1955), recounts some of the cosmic wisdom he received from "Solgonda" and a large number of other god-like Space Brothers. Among his other works are The Council of Seven Lights (1958), Into This World and Out Again, Religion and Science Merged, and When Stars Look Down.