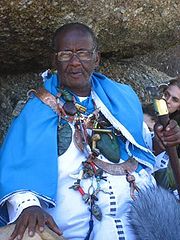 Vusamazulu Credo Mutwa (born 21 July 1921 in KwaZulu-Natal, South Africa) is a Zulu Sangoma and Sanusi from South Africa. He is also the author of several books.[1][2]

His father was a widower with three surviving children when he met his mother. His father was a builder and a Christian and his mother was a young Zulu girl. Caught between Catholic missionaries on one hand, and a stubborn old Zulu warrior, Credo's maternal grandfather, his parents had no choice but to separate. Credo Mutwa was born out of wedlock which caused a great scandal in the village and his mother was thrown out by her father. Later he was taken in by one of his aunts.

He was subsequently raised by his father's brother and was taken to the South Coast of Natal, near the northern bank of the Mkomazi River. He did not attend school until he was 14 years old. In 1935 his father found a building job in the old Transvaal province and the whole family relocated to where he was building. In 1937 he experienced a great shock and trauma when he was seized and sodomized by a gang of mineworkers outside a mine compound.[3] After this he was ill for a long time.

Where Christian doctors had failed, his grandfather, a man whom his father despised as a heathen and demon worshipper, helped him back to health. At this point Credo began to question many of the things about his people the missionaries would have them believe. "Were we Africans really a race of primitives who possessed no knowledge at all before the white man came to Africa?" he asked himself. His grandfather instilled in him the belief that his illness was a sacred sign that he was to become a shaman, a healer. He underwent initiation from one of his grandfather's daughters, young sangoma named Myrna.[1]

Credo Mutwa was a guest in one episode (Day of the Zulu) of a famous series(Secrets of the Dead) from an established producer (PBS).[4]