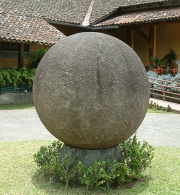 The stone spheres of Costa Rica are a collection of over three hundred petrospheres in the Diquis Delta and on Isla del Caño of Costa Rica. Known locally as Las Bolas, they are also called The Diquis Spheres and stone balls of Costa Rica. These are the best-known stone sculptures of the Isthmo-Colombian area.

The spheres range in size from a few centimetres to over two metres in diameter, and weigh up to 16 tons. Most are sculpted from gabbro, an intrusive igneous rock similar to granite. There are a dozen or so made from shell-rich limestone, and another dozen made from a sandstone. The stones are believed to have been carved between 200 BC and 1500 AD. However the only method available for dating the carved stones is stratigraphy, and most stones are no longer in their original locations. Spheres have been found with pottery from the Aguas Buenas culture (dating 200 BC - AD 600) and also they have been discovered with Buenos Aires Polychrome type sculpture (dating 1000 - AD 1500).[1] They have been uncovered in a number of locations, including the Isla del Caño, and over 300 kilometres north of the Diquis Delta in Papagayo on the Nicoya Peninsula.

The spheres were discovered in the 1930s as the United Fruit Company was clearing the jungle for banana plantations. Workmen pushed them aside with bulldozers and heavy equipment, damaging some spheres. Additionally, inspired by stories of hidden gold workmen began to drill holes into the spheres and blow them open with sticks of dynamite. Several of the spheres were destroyed before authorities intervened. Some of the dynamited spheres have been reassembled and are currently on display at the National Museum in San José.

The first scientific investigation of the spheres was undertaken shortly after their discovery by Doris Stone, a daughter of a United Fruit Co. executive. These were published in 1943 in American Antiquity, attracting the attention of Dr. Samuel Lothrop of the Peabody Museum at Harvard University. In 1948, he and his wife attempted to excavate an unrelated archaeological site in the northern region of Costa Rica.[2] The government of the time had disbanded its professional army, and the resulting civil unrest threatened the security of Lothrop's team. In San José he met Doris Stone, who directed the group toward the Diquís Delta region in the South-West and provided them with valuable dig sites and personal contacts. Lothrop's findings were published in Archaeology of the Diquís Delta, Costa Rica 1963.

Numerous myths surround the stones, such as they came from Atlantis, or that they were made as such by nature. Some local legends state that the native inhabitants had access to a potion able to soften the rock. Another claims that at the centre of each sphere is a single coffee bean.

It has been claimed that the spheres are perfect, or very near perfect in roundness. However some spheres are known to vary by 5 cm (2 in) in diameter. Also the stones have been damaged and eroded over the years, and so is impossible to know exactly their original shape.[3]