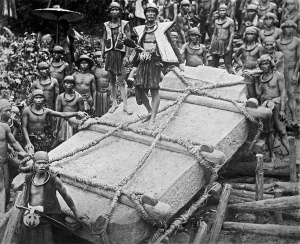 People on Nias Island in Indonesia move monoliths to a construction site, circa 1915

This is a list of monoliths organized according to the size of the largest block of stone on the site. A monolith is a large stone which has been used to build a structure or monument, either alone or together with other stones. In this list at least one colossal stone over ten tons has been moved to create the structure or monument.

In most cases the ancient civilizations had little, if any, advanced technology that would help the moving of these monoliths. The most notable exception is that of the ancient Greeks and Romans who had cranes and treadwheels to help lift colossal stones (see List of ancient monoliths).

Documented in recent times, there is a list of efforts to move colossal stones that used technology that wasn't more advanced than the technology the ancient civilizations used.

Most of these weights are based on estimates by published scholars; however, there have been numerous false estimates of many of these stones presented as facts. To help recognize exaggerations, an introductory description shows how to calculate the weight of colossal stones by calculating volume and density.

Calculating the weight of monoliths

The discussion above is accurate as far as it goes, which is only to the first significant figure. To go any further one needs to be relatively sophisticated about surveying the monolith (including realistic and explicit assessment of the shapes of inaccessible portions of the monolith), then about calculating the volume (and volumetric errors, which vary crudely as the cube of linear uncertainties). Finally and crucially the rock density needs to be measured with appropriate precision. Identifying the rock type is not going to be sufficient as this table (from[10]) illustrates:

Simply identifying the monolith as being "sandstone" would allow a reasonable ± 15% uncertainty in the weight estimate. In practice, one would measure the density of the monolith itself, and preferably document any variation in density within the monolith as they are made of natural materials, which have not been engineered for homogeneous parameters. Non-destructive methods of density measurements are available (e.g. electron back-scatter); alternatively the site may contain already-separated fragments of the monolith which can be used for laboratory measurements or on-site techniques. At the crudest, a weighing device and a bucket can obtain two significant figures for a density value.

The Unfinished obelisk of Assuan

This list includes only quarried, but not moved monoliths.

The 1,250 t heavy Thunder Stone in Saint Petersburg. On top an equestrian statue of Peter the Great

The 53.3 t heavy capital block (the rectangular platform fitted with a railing) of Trajan's Column was lifted by Roman cranes to a record height of about 34 m.

The Western Stone of the Western Wall in Jerusalem weighs 517 t.

Cyclopean walls of Illyrian ancient city of Daorson near Stolac in Bosnia and Herzegovina.

These lists include only quarried, moved and lifted monoliths.

Monoliths known or assumed to have been lifted by cranes into an upright position:

Lifted clear off the ground

Monoliths known or assumed to have been lifted clear off the ground by cranes into their position: